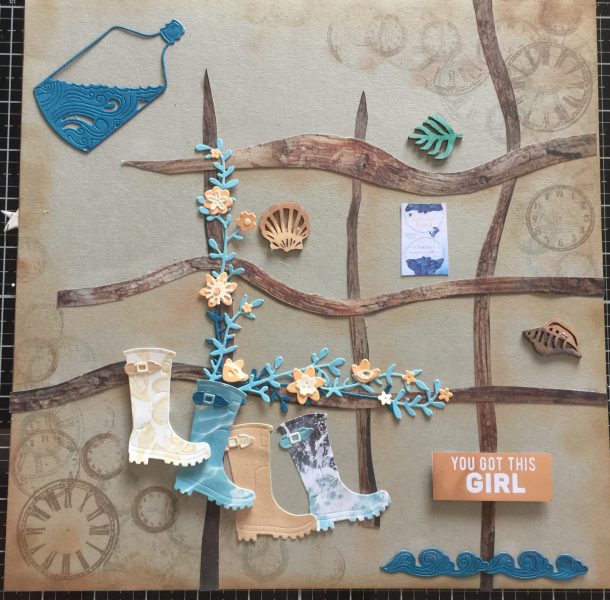 A Lifetime of Impossible Days is the third book I tried scrapbooking, bearing in mind that The Starless Sea version 1 came first and version 2 came fourth in this scrapbooking series. If you’d like to listen to Tabitha Bird, the author, talk about her book, the interview is here as well as on all good podcasting platforms. And, of course, Penguin’s (the publisher’s) page is here.

After having a go at scrapbooking Daughter of Lies and Ruin, I worried that my dies etc are all too small to do anything other than a ‘lost’ or ‘too busy’ page. However, I saw a magazine showing a page where someone purchased a special ‘shadow box’ paper and used it to good effect. I thought I’d do something similar but, instead of purchasing the special shadow box paper, I’d cut strips of ‘driftwood’ from a woodgrain paper. My logic is that bottle created an ocean in Willa’s backyard and driftwood is a feature of beaches.

Every Willa needs her gumboots

I also absolutely had to have the sea dies with the ocean-in-a-bottle that arrives in the post, the waves (also useful for The Starless Sea) and the gumboots and flowers that came in a separate die set. Every Willa needs her gumboots!

I felt bad that red gumboots didn’t feature because Willa’s red gumboots are so special to her. However, I aimed for a coherent colour scheme, which is never my strong suit. I hoped the paper I used for the flowers was vaguely right for orange blossoms. And crossed my fingers that I could manage to pick up some of the colours from the book cover in the items I added, using brown and a pastel orange to complement.

Also, Silver Willa collects gumboots. Her house is full of them, gumboots of every colour and design imaginable. I like to think that Silver Willa would love the various sea-themed gumboots.

Although I hadn’t printed any book covers out for any other pages to date, I persevered with the printer until I managed it for this page first. I’d started and kind of finished Daughter of Lies and Ruin but then I added its book cover after this. I printed the cover for the second version of The Starless Sea after I finished this page. When I did so, I discovered that, for the cover printed here, the printer was set to ‘glossy paper’ instead of ‘matte paper’, so this image isn’t as luxurious a colour as it could have been. And the image for The Starless Sea is a better quality print.

Clocks appear in two of the corners, indicating time passing, time colliding, time travel and alternate timelines. I may have overdone the clocks but, in terms of the story, I think I could have stamped more clocks.

My family never really did birthday cards, at least not that I knew of. I’ve never really been a card person myself but having tools and time creates opportunity. I made these for my father in law, the birthday card first, which ended up being rather cluttered. Therefore I wanted the ‘thank you’ card to be simple, hopefully aiming for elegant-ish. After I finished both, I suddenly realised I’d forgotten to shape the paper. I’ve seen several tutorials that explore shaping paper, particularly flowers and leaves. These cards ended up looking quite flat, but there are opportunities for future cards. 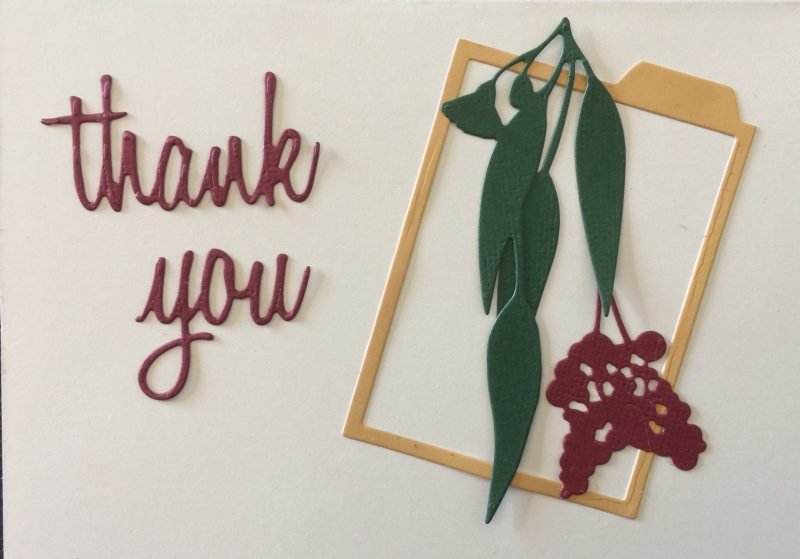 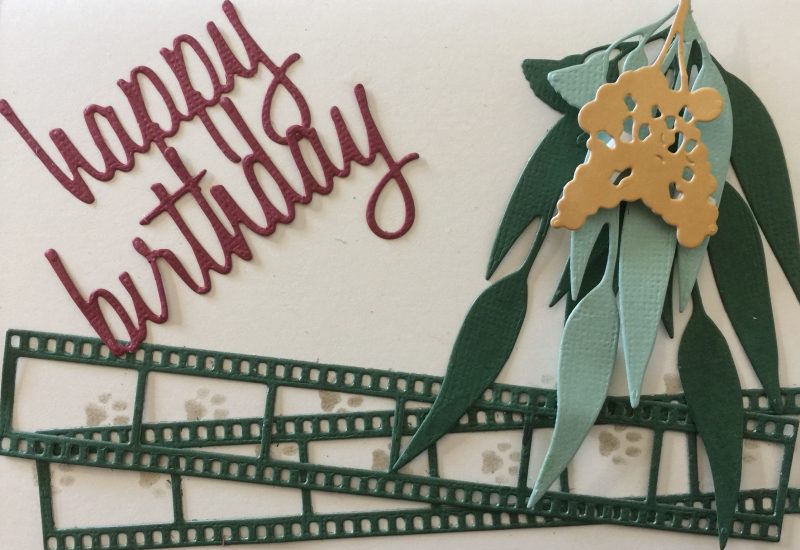