Fake followers on twitter are a thing by Nalini Haynes

I’ve been on twitter now for a year, and that year has been (yet another) learning curve I’ve had to travel in my odyssey that is both the journey and the goal, creating Dark Matter.  One of the issues that surprised me at first was that people massage their numbers by purchasing fake followers.  The first time I recall someone off Twitter mentioning this was in this post by The Bloggess, who is, incidentally, my hero.  She’s funny.  Who do I have to beat up to steal a funny bone like that?

Occasional comments here and there over the course of several months as well as people trying to sell fake followers, slowly drove home the message that FAKE FOLLOWERS ARE A THING.

Also, that having fake followers IS A VERY BAD THING.

Imaginary friends who become characters in your [insert superlatives here] novel is seen as creativity.  Imaginary friends intended to convince others that you’re popular is, at best, desperate.  At worst it’s fraudulent because people’s twitter statistics are used to sell advertising.

Conal Urquart of The Guardian said:

The number of followers of an individual Twitter account is seen as a measure of influence that can be translated into financial value by advertisers and marketing companies.

Katy Howell, chief executive of Immediate Future, a social media consultancy, is quoted by Conal in his article for the Guardian:

But Howell added that the artificial increase in followers might have a superficial attraction, but offers no long-term benefits. “You need to build a connection and a relationship with people who are interested in what you do.”

The full article is here.

In China there are ‘gold farmers’, people who play computer games for a living to amass gold in games like World of Warcraft in order to sell that gold for real world currency.  There are other people who start a character from the beginning, play that character until it’s a top-level character and then sell it to lazy players who can then play end-game content without levelling or learning.  It’s not surprising that entrepreneurs have found a way to make money out of social media like Twitter by selling fake followers.

Every action has a consequence

Maybe fake followers have helped people deceive others in the past, but BUYER BEWARE.  People who cheat the system by purchasing fake followers to boost their numbers are being exposed as frauds, whether intentionally guilty or not.  Increasing number of sites offer programs to check the level of fake followers for accounts.  Just google ‘fake followers’ and see the results.

I’ve been a bit mouthy from time to time, deriding fake followers and those who purchase them.  Trolls were listening. [sigh]

A few weeks ago I shut down my computer one Sunday and returned to Twitter later that evening.  When I returned, I’d had 10,000 followers magically appear.  No longer wet behind the ears, my first thought was an increase of that magnitude in that timeframe was not legit.  Even after Neil Gaiman retweeted a link to my blog I didn’t get a huge surge in followers, so I just DID. NOT. believe this was real.  When I looked at the followers, this was confirmed: lots of the followers had no tweets at all, followed about the same number of accounts and had hardly any followers.

I figured 50/50 it was either an accident – someone else bought followers that were incorrectly assigned – or an act of trollishness that actually cost someone money.  The latter seemed pretty weird and much less likely.

I started blocking and unblocking manually, but for 10,000 accounts this was extremely time consuming.

Someone recommended Twit Block.  This site scans your twitter account and lists those likely to be fake followers, giving them a ranking based on the likelihood of their being fake or spam accounts.  This is an excellent free (donations welcome) site if you’re only trying to get rid of a few fakes as part of regularly scheduled maintenance.

Every follower is listed with <not spam> and <block/unblock> as options, with a ‘X’ option to hide that follower.  Clicking on the follower can open a window with extra information about why Twit Block thinks this account is fake.

If you’re trying to get rid of thousands of fakes, there are ISSUES.

Firstly I couldn’t find any means to delete followers in bulk.  Secondly, after blocking a heap of fakes, the information on the screen starts bouncing up and down, making it really hard to aim and click.  The reason for this is that at the top of the screen little windows appear saying that twitter is down or slow or something: basically, twitter doesn’t like all these blocks, so the system works against you to make it harder to keep ditching fake followers.

I ditched about 5,000 fake followers using a combination of Twitter and Twit Block.

She wanted to know if I was still blocking followers individually.

LATER THAT SAME DAY I found another 35,000 fake followers.

Anita Bell, lovely lady that she is, recommended Manage Flitter as an option, but to deal with fake followers required a subscription.  It’s $12 per month; not a lot of money as a one-off, but I was concerned about length of subscription time.  This is why I’d persevered with Twitblock – after all, it was ‘only’ 10,000 followers…  I could manage this manually…

After the additional 35,000 bringing my then total of fakes up to about 40,000, I decided that I NEEDED a program.  The IT Monster reared its head again, causing a delay of a few more days so he could spend some time researching the issue.  He confirmed that Anita was correct: Manage Flitter is cited as the best program/site to ditch masses of fake followers.

I was concerned about the subscription issue as Manage Flitter gives choices about the level of package and expense incurred, but doesn’t set a time frame for the subscription period.  In the end, I put the account on Paypal, which allowed a commitment to a recurring payment while connected to a credit card and then allowed me to disconnect the credit card and stop the subscription.  I figure I should be able to restart it pretty easily if I need to ditch mass fake followers again.

How Manage Flitter works: pretty damn well, actually.  The program uses heuristics to assess the likelihood of fake accounts, which includes accounts with no tweets and few followers who are following hundreds, but also spam accounts.  It’s possible to block individual accounts and check each one as you go, but if you’re blocking thousands like me, select the ‘fast’ option at the top of the page.  It allows you to select all or a subset of 100 followers at one time and BLOCK THEM ALL with a few easy clicks, BAHAHA.

Unfortunately, computer programs make mistakes.  If you’re a real person who I’ve blocked while ditching my fake followers, I apologise.  Let me know and I’ll unblock you.

Sometimes there’s a boring wait time for Manage Flitter to respond.  The worst was logging in the first time when the program scanned my entire account.  Very occasionally there was an extended response time – a minute or three – between mass blocks but usually the response time was quite brief, seconds only.  Whoever wrote the program has a sense of humour, too: instead of just ‘loading’ or something similar, when you’re waiting more than a few seconds it will tell you it’s dropped your info on the floor, it’s getting your info out of its dirty underwear, his wife told him to do the laundry he’ll be right back, and so on.  The very first time the program loads, if you have thousands of followers to scan, walk away.  Get coffee.  Even set the program to send you a DM on Twitter (this is an option) and do something else.  In my experience, the rest of the time it was usually ok to just wait.

I figure that restoring the integrity of my twitter account cost a lot less than the fake followers cost the trolls:  the above mentioned Guardian article cites the cost of followers as $5 for 2,000 ($112.50 for 45,000 total) fake followers.  The Follow Friday website promotes 2,500 followers for $16.  Either way, it cost me a hell of a lot less to get rid of the fakes than it cost the trolls to inflict them upon me.  😛

The trolls should have given that money to charity. 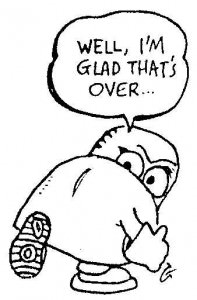