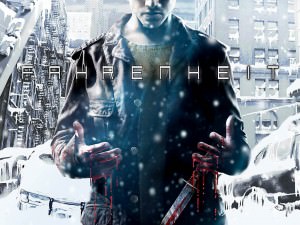 Fahrenheit isn’t so much a game as it is an interactive film. The game is highly cinematic and relies on cut scenes with quick-time events (QTE’s) for action scenes. As Fahrenheit begins, the protagonist Lucas Kane finds himself in a toilet at a diner in New York City. Kane is under a trance and watches as he carves ritualistic symbols into his arms with a knife, and is powerless to stop himself as he exits his cubicle and stabs a man at the sink. The gameplay takes over, and you are thrown into the scene headfirst. You have a short time to think, look around the bathroom and cover up the evidence of the crime anyway possible and escape before someone comes in and finds you.

Easily one of the greatest opening scenes of any game, Kane is left with many questions while he makes an intense getaway, hoping the police won’t be able to track him down. After his escape, the game revolves around you playing through the eyes of four characters: Lucas Kane, who desperately tries to uncover the supernatural forces behind the killing, Carla Valenti, a detective inspector, her partner Tyler Miles, and Lucas’ brother Markus, a Catholic priest. The game takes the player through a complex set of events, weaving the story through the eyes of multiple characters at once.

The player movement and conversation scenes within the game are handled very well. However, the quick-time events are often dull, and distract the player from being able to see the cinematic action scenes fully as they occur. On PC, some QTE’s are quite frustrating, while others seem as though their only purpose is to pad the games length artificially.

While Fahrenheit is one of the first full-3D and interactive games that rely almost completely on story to keep the player motivated (the gameplay on its own would be completely terrible), the overall experience was let down by a rushed final third of production as publisher Atari forced the development team to maintain a stringent schedule and release date. The final third of the story was slightly disappointing.

Overall, despite not being a perfect game, Fahrenheit is a very important and highly immersive experience. I say important because it was considered at the time to be destined to failure (what gamer would want to play an interactive film style game right?) but ended up being a commercial and critical success with almost a million copies sold. Most of this can simply be attributed to the fresh nature of the game, and the intense, dark and compelling nature of the story. If you haven’t played it, I thoroughly recommend you give it a go.