Colonel Katherine Powell (Helen Mirren) wakes up to a phone call in the middle of the night. She readies herself for work and arrives in army camos, giving orders and questioning the inappropriately autonomous decisions of her underlings.

Alan Rickman is Lieutenant General Frank Benson, making his last on-screen appearance as a military man who purchases a doll for a family member on his way to work only to learn he’s bought the wrong doll. Snipe’s voice is perfect for his perplexed and slightly annoyed expression of the subtle differences in near-identical dolls when he requests an underling to fix the problem. Then he enters the political sanctum, liaising between the military and a group of self-satisfied politicians gathered for tea and pastries while supervising a terrorist capture.

Via a drone, Powell watches some terrorists with the intention of capturing and bringing them to trial, hence the title Eye in the Sky. However, the terrorists move location into an area in which the British cannot take military action without huge loss of life. Powell seeks authority for a remote strike, her proposal is to use a hellfire missile on the eye in the sky to kill the terrorists.

Tensions ramp up as Powell watches the 2, 3 and 5 most-wanted East African terrorists assemble in one place. She argues vehemently for a kill authorization.

Politicians want more information. Angela Northman (Monica Dolan) argues that the politicians have assembled to view a capture not a kill. Initially her focus seems to be loss of life but, eventually, her real motives and the motives of the other politicians are revealed as far more sinister.

At great personal risk, an agent is sent in to bug the house.

Components for two suicide bomb vests are laid out on the bed. Military experts calculate these vests could kill 80 people in a crowded market.

One of the stars of this movie is a little girl criticized by a fanatic for playing in her own backyard, who sells bread and whose life is at risk. Although brief, it’s this child’s conversation with her mother over the bread that brings Eye in the Sky to a Bechdel-passing grade.

Eye in the Sky is the West Wing of contemporary military movies. A military operation is put on hold while politicians argue priorities and innocent lives hang in the balance. Tension builds, leading to inevitable loss of life; the only question is, how many and whose lives will be lost? After the splodey bit, Eye in the Sky follows through with the most powerful dénouement I’ve ever seen, encapsulating elements of conflict and character. Soldiers have tears in their eyes. Alan Rickman’s almost-last line packs a punch before he walks out into a surreal yet completely realistic interaction. Eye in the Sky is the best contemporary war movie I’ve seen. Masterpiece. 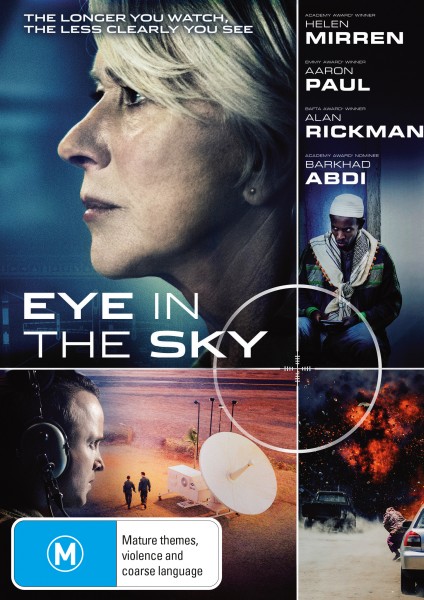