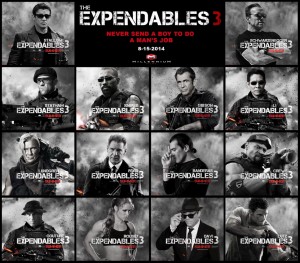 Barney Ross (Stallone) has taken his ragtag crew of specialists to a mission in Mogadishu. The mission goes according to plan until they see a ghost from their past, Conrad Stonebanks (Gibson).

When Stonebanks critically wounds one of the Expendables team, Barney decides he must replace his existing teammates with a younger crowd of experts. But when the Stonebanks captures the youngsters, it’s up to the old dogs to learn some new tricks and save their new team.

The Expendables 3 was so much fun to watch. Within the first five minutes, a train was rammed into a prison causing mayhem and a big explosion. The rest of the film maintained a close level of explosiony awesomeness.

One of the fantastic things about the Expendables series is that it’s like being transported back to an 80s action flick. There are more gunshot sound effects than there is dialogue. The special effects are cheesy. There are great one-liners. They even make jokes within the script about the actor’s personal life or past roles.

A key aspect of these films feeling like an 80s action flick is how many former action superstars feature in them. Mel Gibson has always played quirky characters well, but his role as the villain Stonebanks is exceptional. I could go through every actor individually, but – well, there are a LOT and I’d like to get this review out before the movie has a DVD release. Suffice to say that every actor took their role and owned it, even if their role was to be the actor that isn’t a great actor.

If you don’t like 80s action flicks then the Expendables 3 is most certainly is not a movie you should pay to see. Fans of the 80s genre will get a kick out of the who’s who; the throwback jokes; and most of all the endless bullets and spectacular explosions.