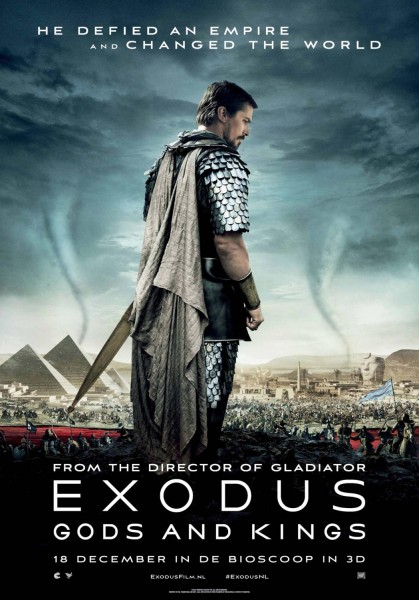 Exodus: Gods and Kings. I really don’t know where to start.

I guess the face of the film is its cast. As far as the cast went, they had an interesting assortment. However, with them they brought an assortment of accents and it appears that no-one tried to amend this. When watching a film about Egyptians and Hebrews in 1300BCE, one would expect that they speak in a consistent accent, even if that accent is the standard American one to which we are all accustomed. In Exodus: Gods and Kings we have English, intermittent Welsh, Scottish, and American. Those are just the ones I could pick. Suffice to say it is an incredibly distracting aspect of the film.

I heard a lot of criticism over the casting of Joel Edgerton as an Egyptian, let alone an Egyptian Pharaoh. If he had given an outstanding performance, I would have accepted that the right person was cast regardless of race. However, the performance of Ramses is lacklustre and boring to watch.

Christian Bale is good. Christian Bale is always a phenomenal actor and the only reason that Exodus: Gods and Kings has been given one star is his screen presence. Unfortunately, one actor can only do so much.

There are some movies I can think of where Sigourney Weaver has great cameos. Paul and Cabin in the Woods are two that come to mind. Exodus: Gods and Kings is not one of them. Her role in the film as Ramses’s mother feels crowbarred in for the sake of having her there. Even Weaver’s performance appears weak and uninspired.

The special effects in Exodus: Gods and Kings are erratic at best. There are some scenes that are somewhat convincing such as the battle scenes. Other times the effects are weak. There is a scene with a Nile full of ravenous crocodiles where the effects are almost on par with RoboCroc. There is another scene with hail falling on a monument that was so terribly done I was distracted from the film wondering who let that scene go to print.

I can’t comment on the accuracies between Exodus: Gods and Kings and the version of events the Bible gives. In all honestly, dear reader, I hadn’t realised until viewing the film that Exodus is the part with the plagues, the pestilence, the famine, the first born sons of Egypt, etc. Had I realised this, would I have gone to see the movie anyway? Probably not. But if I did, I would have been more prepared for what was in store.

Exodus: Gods and Kings is not a movie to go and see if you are an animal lover. I understand that no real animals were hurt during filming, but there are only so many animals, real or otherwise, I can watch being shot with arrows, affected by plague, burnt, and drowned before it starts to get a bit depressing. That doesn’t even take into account the human aspect of Exodus: Gods and Kings. Hebrew people being tortured and slaughtered by the Egyptians. The Egyptians being tortured and slaughtered by God.

Overall, I would not recommend Exodus: Gods and Kings to anyone. The film is depressing, visually unimpressive, showcases poor acting and it is far too long. Unless you really love Bible epics, it’s best to give it a miss.