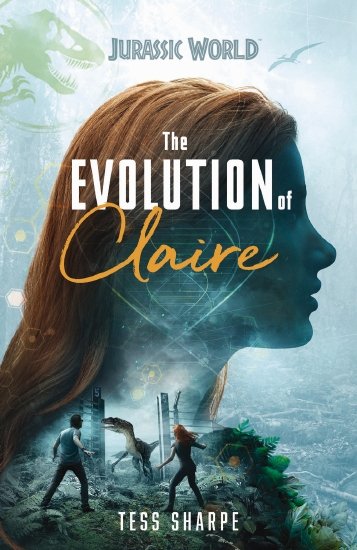 Claire just finished her first year at college. She applied for several internship programs only to wait until the closing date (two days before the internships start) to accept one of them. Her program of choice: Jurassic island. Of course. Against her family’s objections, Claire flies out two days after accepting the internship.

The interns are a varied bunch. Jason is a hottie. The twins Tanya and Eric are dynamic. The girl interns unite to work together. Wyatt is the fly in the ointment: he’s the stereotypical neo-Nazi spoilt rich kid who can do NOTHING right in Claire’s eyes. Literally nothing. His sole purpose is to be the lazy entitled negging anti-girl rich kid. I’d lay money that Tess Sharpe, the author, was thinking of someone specific when she wrote Wyatt.

Wyatt tells everyone that there was a secret intern program before this one, a program that ended badly so it’s been covered up.

Between meeting the dinosaurs and finding an intern’s diary, Claire has her hands full this summer. She’s part Nancy Drew and part Ellie (from the original Jurassic Park).

The Evolution of Claire is so rabidly feminist that it undermines itself. At first my reaction was ‘great!’ then ‘this is getting a bit old…’ After Claire makes a deal with Wyatt then uses attending a women’s studies class at college as the reason for double-crossing him, I felt like chucking the book. Way to undermine feminism, kids.

Furthermore, Wyatt has zero interactions where Sharpe does not judge and condemn him, consistently framing Wyatt’s interactions through Claire’s lens. Never is Wyatt just another intern, never does Wyatt do anything for fun or because he’s part of the group. He’s so two-dimensional that he disappears when he turns sideways. This undermines any message or moral because Wyatt is completely bad and unlikable, unlike people in real life who usually have some degree of complexity.

To add insult to injury, Wyatt is ‘a tall guy with a shock of blond hair so pale it’s almost white’ (p. 67). Sharpe emphasizes this descriptor: ‘the boy with the white-blond hair – Wyatt’ (p. 70). So Sharpe uses stereotypical Nazi symbolism that does not actually represent the average German or Nazi in order to typecast Wyatt as an evil white supremacist entitled bigot.

Doerr addresses the non-‘albino’ appearance of Nazis in All The Light We Cannot See while simultaneously including a character that he declares is an ‘albino’ while having perfect eyesight. Albinism by definition includes vision impairment.

If you’re up for a longer read on academic theory and representations of albinism, see my draft research proposal.

Claire has just finished first year of college and the other interns are even older, more advanced in college. However, they still refer to Jurassic staff as ‘adults’ as opposed to themselves. Apparently, they consider themselves to be ‘kids’ still. I wondered how realistic this is today. Once I left high school (age 15) I didn’t refer to myself as a ‘kid’. Once I reached 18 and was legally of age, I didn’t refer to myself as separate from adults. My history isn’t average – I was forced into marriage because I had a baby at 17 – but still! I doubt that 19- to 21-year-olds would consider themselves ‘kids’ and others ‘adults’.

This jarred as did other issues like the intern program demanding absolute secrecy and all participants signing NDAs (non-disclosure agreements) but they still skyped, discussing secret details with family.

The Evolution of Claire vs the Real World (spoilers ahead)

From the title of this novel, I assumed that Claire would evolve as a person. After all, people go to college and tend to grow up, at least to some extent. Nope. Not so. Claire starts out spoilt and willful, disregarding others, like when she delays responding to any of the intern programs until 2 days before the intern programs start. Which, by the way, I thought was unrealistic: how many intern programs allow you to leave it until the first day of the holidays to reply to a first-round offer? Not to mention that rejecting offers at that late time would inevitably, in the real world, have consequences.

Then Claire reveals herself to be secretive and suspicious, jumping to conclusions. Finally, the supposedly rule-abiding Claire and her accomplice make the most stupid decisions possible and get someone killed. I thought “Finally! She’ll suffer consequences for breaking rules. And they’ll think Claire is the villain here because STUPID DECISIONS!” But no. Everyone magically knows who did the bad thing without explaining how they found out. Then Claire is rewarded for her secrecy and rule-breaking that got someone killed.

This novel raises questions about books intended for impressionable teens who are forming their sense of identity. Without Claire ever being challenged or facing logical consequences for her actions, The Evolution of Claire seems destined to help create a new generation of entitled manipulative princesses. Hopefully this novel will be balanced by more realistic and wholesome role modelling in other books.

The Evolution of Claire showed great promise but, in the end, it fell flat for me. The story arc is more or less what you’d expect but Sharpe fails to position events in a believable frame. A lot of less critical readers love the story because dinosaurs and teenagers; the Jurassic fan wiki is raving about this novel! And Goodreads rates this book at 4 stars. The sociopathic protagonist claiming ‘feminism!’ as justification for sociopathic behavior then escaping all logical consequences killed it for me.

Think of this novel as a shorter version of The Great Zoo of China but aimed at a slightly younger age group.