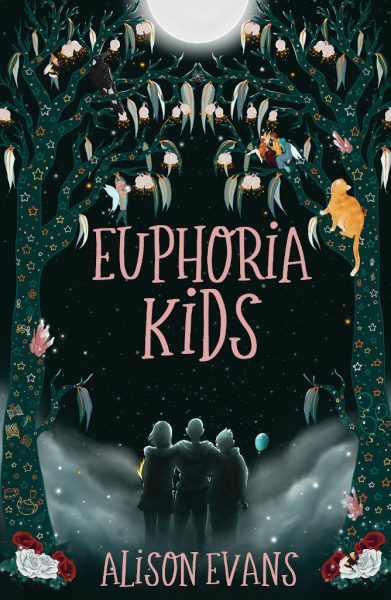 Iris grew from a seed in a garden and uses ‘they/them’ pronouns. Babs has a firey nature and turns invisible. Her invisibility is a magic that is out of her control. They live in Melbourne but in the country with a national park that is in this world and in the world of the fae.

The opening chapters are gentle, reading a lot like Isobelle Carmody’s Cloud Road series for primary school children. So much so that, although I expected a young adult book, I mentally revised my estimation of the characters’ ages down to primary school. Then I revised them back up again once the narrative stated they’re in high school.

Euphoria Kids is a gentle discussion of gender between characters who all come under the “queer” umbrella. There is a hint of romance between two of the characters but perhaps it’s just friendship.

I found Iris’s plant nature and Babs’s fire nature needlessly disturbing. Evans places such emphasis on their natures I was sure they would figure into the plot, probably with Babs burning Iris but, at the very least, with their natures relating to the plot in a significant way. Euphoria Kids did not fulfill this expectation, leaving a thread dangling in mid-air. Evans and I discussed this in this podcast.

Evans refused to discuss gender in the podcast, offended at me saying that people had accused me of attempting to “pass” as a cis-het woman. (I clumsily worded my probing question/comment. Therefore, I am unsure if Evans instructed me to edit it out  because of how I phrased it or if Evans was offended by the topic.) However, in contrast to the podcast, Evans discusses gender in Euphoria Kids.

One point that Evans emphasized in the podcast is that this is a positive representation of gender-queer characters. There is no “coming out” story. The novel talks about gender dysphoria as a diving board for the book’s title: Euphoria Kids. As Will Kostakis said in the podcast with Evans, too many stories focus on the trauma of the cocoon, of the “coming out” stage. It’s time to focus on butterflies. This book focuses on butterflies.

Minor characters, mothers mostly from memory, are disabled in this novel. These women are gentle beings with positive contributions to make. However, disability disempowers them. Evans almost but not quite writes the disabled out of the story.

Overall, Evans represents mothers positively, however little they are in the story. This is so much better than the ‘evil mother’ or the ‘disinterested mother’ tropes often used to give children and teens freedom.

Although Euphoria Kids has high school aged characters, in my opinion it is suitable for younger readers who enjoy mildly surreal narratives. It may hopefully inspire conversations around gender, difference and acceptance. Evans breaks literary conventions including introducing Chekov’s gun but not firing it, which was disconcerting. This story provides positive representation for an under-represented group while focusing on the future not the trauma of coming out. Recommended.