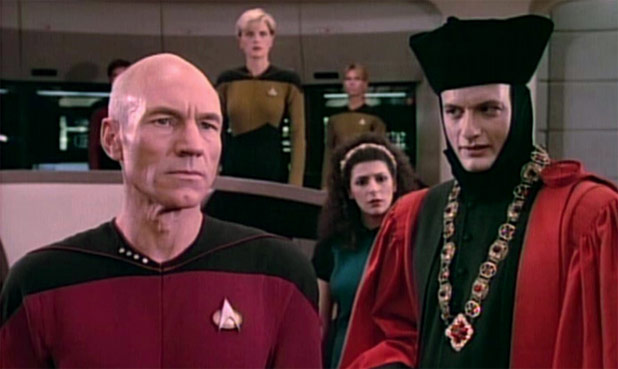 It’s finally happened. The minion bought the Star Trek the Next Generation digitally-remastered bluray box set. It’s the pull of nostalgia while the world goes to shit.

Way back in the mid-80s I saw an article on one of those ‘TV magazine’ shows about Star Trek being rebooted but I didn’t watch any new Trek until the 1990s. When I did, at first it was at a science fiction club in an auditorium at the University of Tasmania. Then it was bootlegged copies direct from the US via relatives of those who recorded the episodes.

Channel 9 in Tasmania played games with Star Trek SO MUCH that, just before one of the Star Trek movies was released, they showed the last seaon or few seasons STNG in a burst WITHOUT ADVERTISING IT IN THE TV GUIDE. I only heard about it from a friend when it was halfway through. Rumor had it that the creators or distributors threatened to sell the movie rights to a different TV station if Channel 9 didn’t finish showing the series before the movie was released in cinemas.

As you can imagine, my viewing of STNG at the time was sporadic, I may have missed episodes, episodes were cut to increase advertising time… The US ads were hilarious and much better quality than the ads we were seeing in Australia, even if the ads were for the same product.

So, now, for the first time, the minion owns the complete Star Trek the Next Generation series. And we’re going to watch it in all its glory. And horror. And cringeworthiness. And comedy. And…

The other night we sat down to watch ‘Encounter at Farpoint’. Booting up the bluray we discovered that, before we watch Star Trek the Next Generation, we’re forced to watch advertisements — for Star Trek the Next Generation. Apparently no-one realized that, if someone had purchased the entire series that advertising the series was somewhat redundant.

The USS Enterprise is on a diplomatic mission to Alderaan — oops, Farpoint. While there, they will pick up the remainder of their crew that, amazingly, doesn’t seem to include redshirts other than that redundant number one, Commander Riker (Jonathan Frakes), but does include key personnel like the ship’s chief medical officer, Beverly Crusher; her annoying teenage son, Wesley Crusher; and an engineer, Geordi La Forge.

En route to Farpoint, the Enterprise encounters Loki in the form of a being calling himself Q (John de Lancie). In a series of montages, Q accuses humanity of being barbaric, claiming he wants to punish the crew of the Enterprise for the sins of their human ancestors (no mention of punishing the non-humans on the crew).

Thus part one of the pilot establishes that humanity is far more civilized than in previous centuries, a theme Gene Roddenberry insisted upon until his death when Deep Space Nine became more interesting. (Orwellian politic-speak, anyone?)

Part two of the pilot brings the two halves of the crew together, establishing Commander Riker’s arrogance, Lieutenant La Forge’s (LeVar Burton) blindness and subordination to Riker, Beverly Crusher’s (Gates McFadden) prior relationship with Captain Picard and Wesley Crusher’s (Wil Wheaton) incredibly annoying perkiness alongside what is supposed to be his genius.

Admiral Leonard McCoy (DeForest Kelley, the chief medical officer in Classic Trek) has a cameo in possibly the worst ever old-man makeup, with indentations on his cheeks looking like a mask was about to fall off. I don’t know why they didn’t just let him appear as he really was, with someone commenting on how good he looked for his age thanks to futuristic anti-ageing technology. In terms of fan-service, this was a win as was every episode where the original crew was brought back from the past. And the movie where a certain captain DIED.

Miles O’Brien (Colm Meaney), everyone’s favorite transporter chief and soon-to-be Chief of Deep Space 9, features in this pilot zode! He’s nameless, only cited as the ‘battle bridge conn’ but he’s there! He doesn’t look much different to how I remember him in the final season of DS9 all those years later.

The digital re-mastering is, mostly, excellent. However, during the pilot I was continually distracted by people’s makeup. Either the makeup department did an awful job, making people unnaturally pale or overly dark, or the digital re-masterers hadn’t figured out what colors to paint faces. Especially when certain characters changed color throughout this story.

And Tasha Yar’s makeup! Seriously, with lipstick struggling to stay on her lips and eyeshadow caked on so thickly, she couldn’t possibly indulge in hand-to-hand combat without a quick trip to the Enterprise’s one smallest bathroom to fix her makeup. And she’s the security officer! However, I do like Yar as a character. More on her in episodes to come.

The overall story was better than I expected; I’ve entered into this re-watch expecting the suck fairy to visit big time but it didn’t. Dare I say it? The story held together better than Steven Moffat Doctor Who.

People’s interactions were a bit off. For example, there is a beat or two — a pause — between question and answer. There are comments that sound forced and should not be in a 45-minute episodic TV show. It’s a bit ‘talky’, with unnatural dialogue replacing exposition, some of which is a bit repetitive. People move and pose theatrically, similar to the way I imagine the intentional poseur in a Regency romance to pose. Riker moves, stops, twists at the hips, strikes a pose with his arms and speaks. Set to the right tune, it could be a comedy.

The overall story wasn’t fabulous but it wasn’t bad. Considering it’s nearly 30 years old, it’s hard to say whether “it’s been done before” or “it’s been copied”. ‘Encounter at Farpoint’ does a good job of introducing the world, the ship and the characters. The stage is set and the ship is launched. My memory of STNG and this episode from first viewing is that I loved it. When I hired it on DVD somewhat later in the 90s, early STNG had lost its lustre, replaced by later, better seasons and competing with Deep Space 9 (my favorite Star Trek franchise) and Babylon 5. Now, viewing it both as a science fiction artefact and a current story, ‘Encounter at Farpoint’ has passed the test of time.