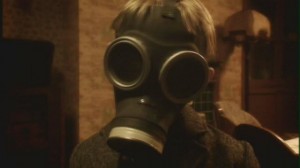 The Doctor and Rose follow a manic spaceship travelling through time while sending a mauve alert, the alien signal for extreme distress because humans are stupid using red. They land in London…

The Empty Child starts a two-part Doctor Who story set (mostly) in London in 1941 during the Blitz with Germans dropping bombs and Londoners scurrying for shelter.

Rose keeps asking the Doctor to scan for alien technology. The Doctor says he’ll just ask around instead. Queue nightclub scene with the audience laughing at the Doctor for asking, from the microphone, if they’ve seen anything drop from the sky lately.

Meanwhile Rose sees a child on a rooftop. Concerned, she tries to reach the child to ensure his safety. When a rope suddenly drops from the sky (as it does), Rose barely hesitates; she grabs hold and starts climbing, only to discover that she’s hanging from a dirigible in the middle of an air raid with a Union Jack on her chest.

Captain Jack comes to the rescue, full of sexual innuendo aimed over the heads of children and firmly at adults. Before he rescues Rose, Captain Jack violates London’s blackout rules by standing in an open doorway back-lit from within.

The Empty Child is comic horror, establishing Doctor Who’s LGBT credibility with Captain Jack’s flexibility of orientation and obsession with ‘dancing’ (established for the adults as a euphemism for sex).

The Empty Child might be a bit too much horror for the youngest members of the audience although, as Matt Smith says, the Doctor fights the monsters to protect the littlies. Overall this episode is fun, with even tense moments combining horror and comedy. Highly recommended for family viewing.

I love Captain Jack in Doctor Who; the Empty Child establishes his outrageous character and sets the tone for future episodes. The extras on season 1, disc 2 of the bluray set include ‘The Adventures of Captain Jack’; wait until you’ve seen the whole season to watch this or risk spoilers. John Barrowman (Captain Jack) talks about Captain Jack, his suggestions for developing the character and his desire for a spin-off series. From the sounds of this feature, Torchwood hadn’t been announced when this was filmed.