For those who’ve read my review of A Lifetime Of Impossible Days or listened to my podcasts featuring Tabitha Bird as a guest, just run along and buy The Emporium of Imagination, ok? It doesn’t take much imagination to anticipate this review.

You’re still here? Ok. What can I say? Let’s start with the characters and setting.

Earlatidge arrives in Boonah, Tabitha Bird’s town, with a vintage lunchbox. Upon finding a vacant block, he places the lunchbox on the ground, utters some magic words – we learn the significance later – then stands back. The Emporium of Imagination unpacks itself.

For the next few days, Earlatidge searches for the shopkeeper while also looking out for his replacement, a new custodian. But things don’t run as smoothly as he’s used to. And bits of him keep disappearing…

Boonah as a character

The town, Boonah, is as much a character of this novel as some of the people. Early on we “see” the town clock. Town clocks are usually predictable in style but not Boonah’s. 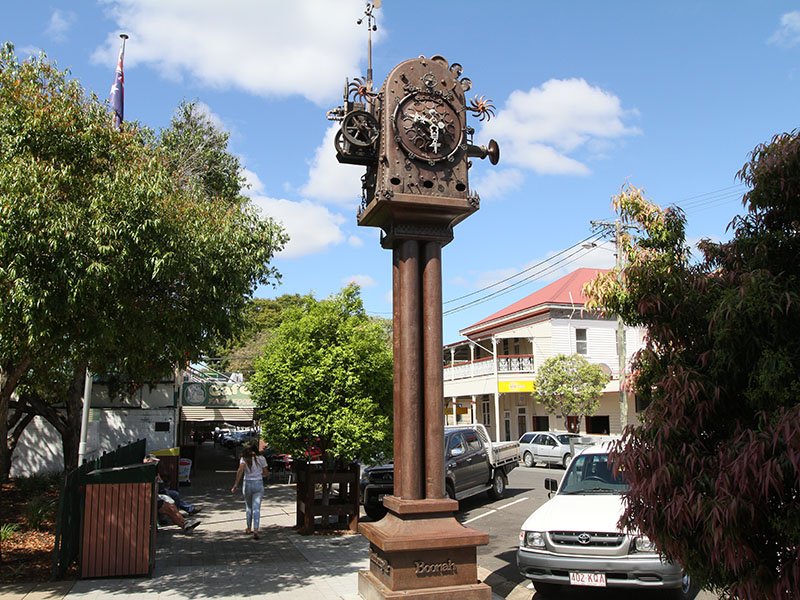 I more than half wondered if the book’s clock was a fabrication but Bird recreated her town faithfully (within the constraints of the story).

J M Frey intended to write a novel featuring real landmarks as an ode to Canada (podcast conversation here). Ever since I’ve been thinking about compiling an Australian Directory of Real Landmarks from novels. And this clock would be my first entry!

Bird also mentions the Story Tree Café, Maynards Store and many more features of Boonah. I already fell in love with Boonah’s (Bird’s favourite) café bookshop antique store, Story Tree Cafe (4.6 stars with 81 reviews online at the time of writing this review). After the pandemic I totally want to visit this town for a holiday!

As the Emporium’s custodian, Earlatidge can usually hear people’s grief but he keeps running into Ann only to feel her silence. She’s so bound up by her grief that she can’t let herself experience it, not after the love of her life died, not after her sister died, and not while her nanna is dying. We follow Ann’s journey as well as the journeys of many townspeople throughout the novel.

Bird brings even the most fleeting of characters to life with her snapshots of their lives and their griefs. Most remarkably, she shows them healing and connecting with their community.

In contrast, the central characters absolutely sparkle. Earlatidge, Ann, Enoch and their close families weave a tapestry that becomes the reader’s cozy comforter.

The Emporium of Imagination‘s function is to help people embrace their grief and heal. Bird establishes this in the first few pages then we, as readers, are swept along with the characters’ tides of emotion. They write about their losses in the Owner’s Guide, a book within this novel that then moves mysteriously to others who both read and write in it. Human connections are made. Support is given and received. People rediscover their dreams and fall in love.

I cried BUCKETS. There are some books I find too difficult to read because they’re so emotional or their topics are too overwhelming. THE EMPORIUM OF IMAGINATION IS ALMOST IMPOSSIBLE TO PUT DOWN. I would have read it in one sitting if I was physically capable of reading for that long. (I’m vision impaired so I just can’t.) This story is full of healing and hope. I was amazed at Bird’s ability to write healing and hope in connection to childhood sexual abuse in A Lifetime Of Impossible Days. She’s knocked it out of the park again!

The Emporium of Imagination is beautifully realized, eloquently written and full of hope and joy with full recognition of life’s pain and turmoil. It’s a little Mister Magorium’s Wonder Emporium but is so much more.

Read The Emporium Of Imagination if you enjoyed A Lifetime Of Impossible Days by Tabitha Bird and Mortal Fire by Elizabeth Knox.