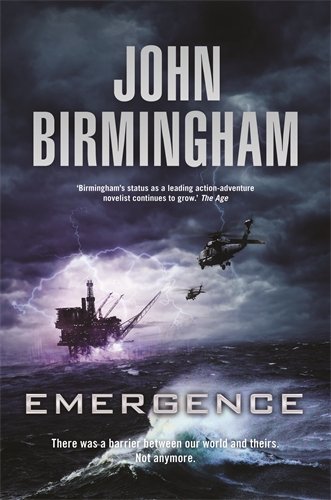 During the Emergence Dave Hooper is the safety engineer working on an oil rig. He flies to the rig the day before his shift starts so he can detox and, hopefully, not get into trouble for his night with two high-priced sex workers, copious amounts of booze and cocaine.

While in flight with Julia piloting, an alert sounds warning everyone away. A terrorist attack is underway. The military are taking control. The alert is changed to an explosion. Dave fears his ass is on the line.

As the safety engineer, Dave is concerned for the rig, for his ass and for his friends. Dave tells Julia to fly him in, violating the no-fly zone. They land.

Emergence resembles War of the Worlds

Terrified riggers enact a miniature War of the Worlds stampede, pushing and shoving to get on the helicopter. Dave charges towards the problem, guided by a mate. On the way, Dave picks up a splitting maul that someone left behind before being attacked and eaten by the monsters.

Dave hauls back and lets that splitting maul — the one he can barely lift — fly through the tiles, a beam and the biggest monster’s head. There’s a flash. Dave is magically transformed into a comic-book superhero with inconsistent hunger pains and an Achilles heel (a superhero weakness like kryptonite) that has yet to be explained.

Survivors from the rig are rounded up by the military. Some are flown to a secret base to isolate them from the media. Why some are taken and others are allowed to roam free inciting horror stories in the news is not explained.

What ensues is monster mayhem in a cross between a serious military action novel and a superhero comic.

I love comic-book style stuff. Like Guardians of the Galaxy: the opening scene introduces Peter Quill. He dirty-dances to an awesome soundtrack while heading in to ‘salvage’ an archeological item: Indiana Jones but with more verve. By the time you realise Peter is an absolute asshat who you wouldn’t want to know in real life, he’s already got you on side.

Dave Hooper is the opposite. Dave Hooper emphasises his dickishness. Even when I started to realize he had some redeeming features — like caring about his work colleagues who are his mates — he overshadows those redeeming features by harping on some more about the ‘hookers’ with whose fee he could have paid bills for his kids’ upkeep. I’m guessing the aim is to give sexytimes interludes as flashbacks, Game-of-Thrones style in the Emergence movie.

On a more literary note, I laughed in some of the wrong places. Like on page 2, which reads “…having read it in one of the unreadable werewolf romances…”

Not flawless but tons of fun

On page 34 Dave picked up “a glass of water” and “used his good hand and teeth to open it” while a nurse watched and didn’t help. WTF?!? By the end of the paragraph the glass morphed into a bottle of water but on page 47 it morphs back into a glass that shatters when hit.

Dave seems to be a homophobic macho guy with penis issues (penis envy?) as he focuses on genitalia. Some characters are ‘cocksuckers’ with ‘monster cocks’ who, Dave thinks, ‘possibly ass-fucked’ their victims.

This red-necked attitude extends to his perceptions of others. For example, Captain Heath seems like a perfectly ordinary guy (for a successful military officer) until Dave notices a limp. Heath reveals he lost his leg to a ‘road mine’. Heath ceases to be an individual with strengths and weaknesses; he becomes a prosthetic leg with a human attached.

All the characters are fairly two-dimensional because we only see the world through Dave’s eyes (in the third person) and the monsters’ eyes. The monsters as third-person narrators are particularly problematic. I found it difficult to understand what was going on. For example, a monster faces a machine going ‘whump, whump, whump’. I assumed this was a helicopter and was trying to figure out how a ground-hugging Bronze Age monster could have brought a chopper down. It was a car. D’oh. In another attack a dragon (yes, A DRAGON, squee) attacks an aircraft. I was waiting for the chopper propellers to cut the dragon to shreds. The advert for book 2 explains that the aircraft was a plane. Interpreting the monsters’ points of view was a bit like trying to do Sudoku while reading.

Emergence is part Game of Thrones (sex scenes via flashbacks during exposition), part serious military and part comic-book superhero with a protagonist who’s almost an anti-hero. The monsters’ points of view require interpretation or reading on until the narrative explains all. Characters are fairly two-dimensional although Dave Hooper has a backstory endeavoring to be complicated. Emergence will be the book of the year for some people although I prefer my unlikable protagonists doused with humor.

Book 2, Resistance, is out now.