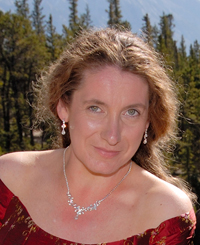 Songs of the Earth by Elspeth Cooper is epic escapist high fantasy based on European mythology about the Wild Hunt.  The protagonist, Gair, is a young man of mysterious origins with extraordinary magical powers.  Narrowly escaping a death sentence due to political machinations by people he’s never met, Gair travels to an academy for students of magic where he makes friends for the first time and aggravates new enemies.

The hero with obscure origins finding himself, a forbidden romance, betrayal from within, destiny: these are common tropes reflecting influences from a variety of beloved authors.  Elspeth weaves these threads together well, appealing to fans of iconic authors who’ve been waiting for another high fantasy ‘fix’ and to fans of fantasy who haven’t read those who’ve gone before.  Children who enjoyed Alan Garner’s The Weirdstone of Brisingamen and Ursula le Guin’s Earthsea series (the books, not the Anime nor the TV series) will enjoy Elspeth’s Wild Hunt as adults.

Songs of the Earth is so popular it was shortlisted for a Morningstar Award  in 2012, which is a ‘best fantasy’ award for a new author.  Book two, Trinity Rising, is out already.  I think book three is due out next year.