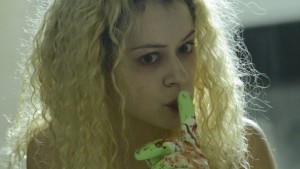 My first review of this series was Orphan Black s01e01: Natural Selection; if you don’t want earlier episodes spoilt, don’t read this review.

Clone Club members actually start discussing the nature versus nurture debate. Their differences emphasize the series writers weighing in on the side of nurture to cultivate their differences.

Sarah is back playing cop, waiting for the house of cards to crumble when she slips up irrevocably. Or when another clone impersonates Sarah impersonating Beth, slipping in to the police station and interacting with IT dude who is totally crushing on Sarah.

This is the ‘zode that starts to piss me off. Sarah stabbed Helena with rebar (a metal rod) in the previous episode. Helena walks away, pulls the rebar out of her gut, visits some strangers’ house to use their medical kit to bandage herself up and off she goes. On foot, apparently, because Helena leaves her stolen motor-bike behind.

Let’s just unpack that, shall we? Helena is stabbed in the gut. She could have suffered a blunt-force trauma (been thumped on her side) with the bar but Sarah STABBED Helena. Roughly where Helena’s kidney, liver and bowel are. Apparently it went fairly deep but not so deep that Helena haemorrhaged or needed internal surgery other than some ‘self-surgery’. She doesn’t suffer from damage to vital organs or internal bleeding. In fact, Helena’s blood-trail was quite delicate and lady-like considering that she had a fucking great rod stuck in her belly.

This is the first time Helena’s super-human death-defying ability pissed me off. There will be more rants in reviews of later episodes. Meanwhile, I’ll stick my fingers in my ears while singing ‘la-la-la’ really loudly and try to pretend this bit didn’t happen.

Mostly ‘Effects of External Conditions’ was good, maintaing the plot with a reasonable degree of intelligence while developing the characters. I’m still hooked, it’s just been a gap of a week or two between reviews because Helena’s super-power pissed me off so much I found it difficult to write this review. Effects of External Conditions is on IMDB sans my ranting and with a higher rating than I gave it.

My review copy of Orphan Black season 1 was courtesy of Roadshow.