In the previous episode Octavia demonstrated her leet Earth skills by going swimming only to be almost eaten by a gigantic snake (NOT a crocodile, thus excusing the relatively minor wound she received after being taken for a death roll). However, in this episode a couple go into the water AGAIN; Clarke is reluctant but doesn’t say “Hell no, remember what happened yesterday?” And when Finn pulls her in, she decides this is all right, there’s no danger.

Until she notices the blood splashed around by the side of the waterfall. Apparently the Grounders took their missing person for a lovely stroll around the countryside before stringing him up on a tree as bait.

The 100’s primary concern is food regardless of the nuclear fallout.

Documentaries showing the fallout from Chernobyl and now Fukishima show mutations in the wildlife but the hidden risk — the high fatality rates — isn’t as obvious. These teenagers think they’ll survive but they might grow two heads like some of the wildlife.

Thus wading, swimming and drinking the river water doesn’t worry them. Apparently it’s not acidic nor is it toxic. My cynical self deplores this but, I guess, without water there wouldn’t be a story.

In the first episode there was an Avatar-esquire scene where fungi glow in the dark like a scene from a fairy tale. It was quite gorgeous although it didn’t compare with James Cameron’s Avatar. In this episode Octavia wanders off following a glowing butterfly. I waited for the butterfly to be a trap but no, it just leads to human kissing.

Until big brother finds out and strings the guy up. Literally.

Apparently he’s strung up so far from camp that people sitting around the camp fire can’t hear his cries for help. Where are the predators? The other guy that was strung up was bait for a very hungry big cat. Is this guy going to be dinner?

On the ark tensions mount as their life-support deadline looms ever closer and the bracelets worn by the 100 fail. Against all logic, certain people on the ark decide the kids are removing the bracelets. Eventually they come up with a plausible explanation but it takes an episode of Abigail, Clarke’s mother, hoping in spite of the evidence before a girlfriend of one of the One Hundred gives Abigail a logical explanation.

Abigail and Raven (engineering chick played by Lindsey Morgan) pass the Bechdel Test and look to become a kick-ass team.

I like these characters and their plotting although it’s easy to get snarky about some of the shenanigans, especially on the surface. So far, so good. For an SFF TV series, The 100 is well above average. Yay! 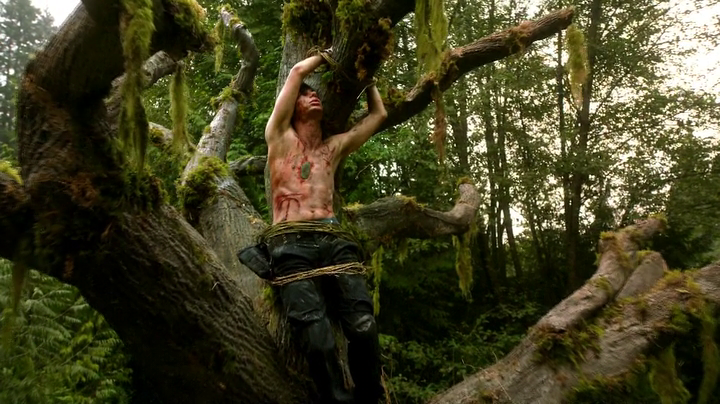