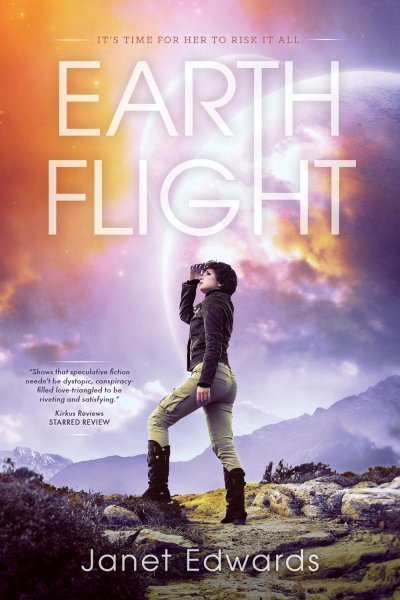 Earth Flight is the final book in the Earth Girl trilogy (Earth Girl and Earth Star) about Jarrah Morrath, a Handicapped or disabled girl living on Earth. She is fighting for acceptance.

Jarrah and her boyfriend Fian are back at university with her team, out of military uniform because they are in disgrace. They’re due to return to the military either when they finish university or when the alien home planet is discovered. They’re back to excavating archaeological dig sites on Earth, each with its own unique hazards, then Jarrah is attacked by people who hate the Handicapped. The military assign a protection detail but even that doesn’t stop a bomber.

Meanwhile, the military are searching the known universe from Earth outwards, checking worlds passed over for human habitation before expanding into the unknown in their search for the alien civilization.

Acts one, two and three

Earth Flight has three distinct acts. Act one is a recap of the previous two novels while building the groundwork for later events. There is a focus on info dumps masquerading as somewhat stilted conversations. Although the talkiness got on my nerves a bit, this was a helpful recap as I’ve read a lot of books since the last installment in the trilogy. I’d prefer an optional ‘Previously in the trilogy…’ section prior to the story starting but most novels don’t include that as an option.

Disability discrimination in the future

Overall this trilogy is great, inviting non-disabled people to explore their potential discrimination against others and how they take their privilege for granted. The story also provides representation for disabled people. I was disappointed with some of the events later in the story. I won’t discuss my reasons here due to spoilers. If you’re familiar with my views and you read Earth Flight, you will know to what I am referring.

Earth Flight, the final in the Earth Girl trilogy, delves into disability with Young Adult protagonists in a positive manner while providing entertainment, action, danger and romance. Earth Flight provides what is, to most, a satisfying ending.

A certain event in book three of the Divergent trilogy was, to me, a strength of the trilogy and the saving grace of book 3, the least of the trilogy. I say this to give context: in the end, Earth Flight was too positive and too nice for my taste. But then, I have a disability. I used to believe justice would prevail after a senior social worker in the Department of Health in South Australia told me “Your disability is your choice because you’re too vain to wear coke bottle glasses”. And after managers refused disability access verbally, publicly, and in email.

I enjoyed Edwards’s exposure of discrimination, especially her depiction of Hospital administration. I did not enjoy the happy ending because, for me 10 years later, I still haven’t regained any ground after losing not just my job but my career. And yet, a more realistic ending would provide a less satisfying ending for many.

Updated 18 December 2019 because the cover disappeared. Also, I edited the text to comply with Yoast’s ‘readability’ assessment.