A guest blog by Duncan Lay

Obviously that doesn’t imply that I have lost my grip on reality. Naturally, fantasy, by its nature, requires a certain suspension of disbelief. Magic, strange civilisations, bizarre creatures, different Gods – they all have their place in fantasy and are instantly out of place in our world.

But that doesn’t mean fantasy books have to be completely out of touch with reality.

They need a bedrock of truth to make the fantasy elements almost believable.

You can create any sort of society, any type of creature, but they have to have some sort of logic behind them. If you can explain it in a rational way and it behaves consistently, then I’ve got no problem with it. It really sets my teeth on edge when reality is bent just to satisfy a story’s narrative.

It doesn’t have to be a big thing either, just a series of little ones.

The classic I give as an example is the movie 10,000BC, where they moved climates and ecosystems at random because the next scene demanded it. Yes, the whole movie was risible but I’ve watched silly movies before and gone with it. A classic case is The Ice Pirates, a 1980s sci-fi spoof that mixed in aspects of Star Wars, Aliens, Star Trek and a host of other shows. It was utterly preposterous but its central premise, that water was so scarce it was now worth more than gold, was reasonable and so you went along with it. 10,000BC, on the other hand, just annoyed me.

It’s like a popular fantasy series that I read where an attacking force was defeated but kept attacking until the very last man was killed. What?!?! Unless said force is possessed or suicidal, NOBODY fights to the last man. You surrender or you run. That just made me irritated and I didn’t even read the last book of the series.

I think the best way to add some reality to fantasy is through the characters. After all, there is a grand total of seven story archetypes, so no matter what brilliant plot twist you think you’ve come up with, probably someone has something similar. But characters are unique. Come up with a realistic character and your readers will want to see how their journey ends, no matter the strange places it takes them.

Some of that can come from personal experience, some from making your characters react as normal people would.

I interviewed legendary fantasy author Raymond E Feist and he told me he knows where the story starts and where it ends but the route the characters take to get there can go down some strange detours. That’s how I love to write and that’s what got me so inspired after meeting him that I started to write fantasy.

He did write to me after I got my first contract, saying if I get rich and famous, don’t go blaming him!

I am passionate about creating characters that people want to follow. And not just the main characters either. All the way through my books, the journeys of some of the “minor” characters have pulled at the heartstrings just as much.

Book two of The Arbalester Trilogy, The Bloody Quarrel, sees them plunged into even darker situations.

Fallon has to come to terms with unwittingly murdering his friend and trying to save the rest of his village, while an old enemy from her past returns to terrorise Bridgit and test just how strong she is.

There’s an old saying that life will find where you are weakest and strike you there. How you react, how you deal with it is a true mark of who you are.

Fallon, Bridgit and their friends are about to find out how real that is.

And if the readers find that real, then I hope they will enjoy the fantasy elements all the more.

You can find Duncan Lay:

You can find The Bloody Quarrel:

You can find Momentum publishers: 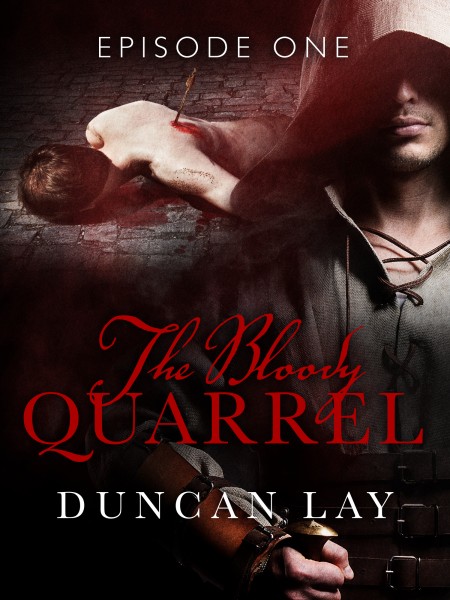