Wai Chim contributed to the Authors For Fireys fundraiser in January 2020. Emily Gale and Nova Wheetman organized this mammoth undertaking. They raised $513,149 to support firefighters and to help Australia’s bushfire survivors.

Wai is the author of a number of children’s titles, including the Chook Chook series and Shaozhen. Her debut YA, Freedom Swimmer was published by Allen & Unwin in Sept 2016. The Surprising Power of a Good Dumpling is out in August 2019.

Wai was born in New York City in the US. Although her parents didn’t speak much English, Wai harboured a passion for books from a very young age, sneaking stories into bed to read well into the night.

Wai graduated from New York’s elite Stuyvesant High School and later from Duke University with majors in Economics and English. With a thirst for adventure and unique experiences (okay I really just didn’t know what else to do!), after graduation Wai moved to Japan where she spent over a year teaching English to children.

In 2006, she moved to Australia to enjoy the sun and to pursue her passion for writing. She completed a Graduate Certificate in Creative Writing at the University of Sydney under the inspiring tutelage of great Australian writers such as Kathryn Heyman and David Brooks.

Outside of writing, Wai enjoys cooking, pretending to yoga and ogling cute animals. She also spends a lot of her time creating paper craft animations and adventures for @bogsthepenguin. Part of the internet generation, she works as a digital producer, copywriter and digital creative for a number of notable Australian brands and agencies.

Wai is represented by Brian Cook at The Authors’ Agent. Her debut YA, Freedom Swimmmer was published in September 2016 with Allen & Unwin.

I am a novice card maker but I made the pictured card. This is a thank you to Wai Chim for appearing as a guest on Dark Matter Zine and for supporting Australia’s firefighters. 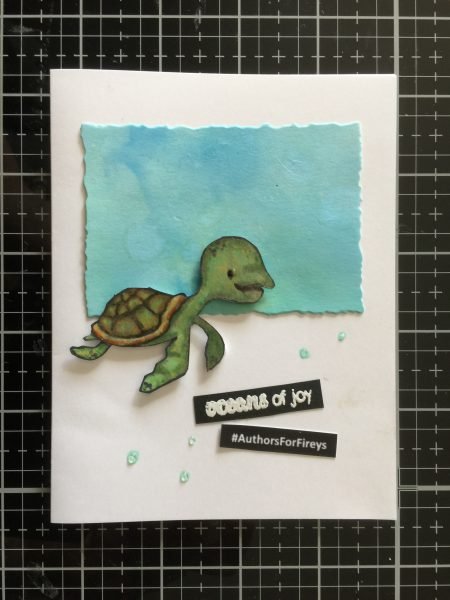 Last year I stamped, colored (with alcohol markers) and cut out this little guy. He joined my growing pile of ‘pieces’ waiting for inspiration. Kelly Latevola’s blog and youtube channel include videos on making and using watercolor scraps; here’s one of the related videos that inspired me and here’s another.

Once I finally (happy dance) received my order of Distress Oxide Inks, the first thing I did was play around with them coloring some paper to use for backgrounds. It’s one of my favorite things to do!

I used a deckle-edged rectangle to cut out the background, copic markers to put dots down then glossy accents over the copic markers to evoke the idea of water droplets. The “authors for fireys” sentiment I printed but the “oceans of joy” I stamped and heat-embossed with white embossing powder.

Although this kind of card is pretty simple and doesn’t take nearly as long as some other cards to make – it only probably took a couple of hours including the background, of which I have lots left even now – I enjoyed this. I hope people enjoy receiving these kinds of cards because I’m sure I’ll be sending more ocean-themed cards in the future!

I’m struggling, feeling oh-so-depressed while governments fumble then decide to put the economy before people. Things I find uplifting are becoming increasingly important. This includes allowing myself to play, and card-making definitely comes under the umbrella of play. Even when it becomes work because I’m pushing myself to do that instead of sit on the couch ‘doing nothing’, which is, all too often, looking at twitter and news articles.

Find what makes you happy, what uplifts you in these times, and focus on that. Make it a priority. Look after yourself and stay safe.