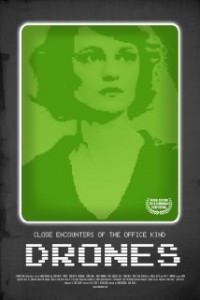 Brian is a low-level office drone who spends his days flirting with Amy while fending off office weirdo and best friend Clark.

That is, until Brian walks in on Clarke talking to his alien boss. Clarke convinces Brian to ask out Amy, which seems like a great idea until Brian discovers Amy is an alien too.

Any minute now we’re going to find out that the office boss is an alien because NO WAY is this dude a real human being.

I’m not the first to say this but I totally agree: Drones is a cross between The Office and Close Encounters of the Third Kind. I think a sliver of Hitchhiker’s Guide is also thrown in. The usual office drones type humour is paraded across the screen while a sub-plot evolves: the alien invasion is here. The ‘Vogons’ are about to destroy the planet to make way for a by-pass – or use it as fuel or something – detracting from company productivity and destroying Brian’s little romance!

While Drones could improve its pacing, this indie movie is a pleasant break from Hollywood reproductions of Hollywood productions. The humour ranges from everyday social comment to the ridiculous, evoking memories of Third Rock from the Sun. Office romances, a water cooler that doesn’t work and a disastrous power point presentation that was more entertaining/awkward than the ‘successful’ power point, all combine for a pleasant outing.

“Here the banalities of office life may be lampooned, but they are also ultimately celebrated, both as a force for gradual progress and a microcosm for the petty struggles of the known (and unknown) universe.”

Directed by Buffy the Vampire Slayer alums Amber Benson and Adam Busch, Drones is more reminiscent of Jonathan Parker’s Bartleby adaptation or an episode of The Office than a SyFy Channel original movie…

…this is far from the first time that someone has pointed up the absurdity of management buzzwords and strongly-worded memos. But considering how many of us spend, in the words of one character, “the best hours of the best days of the best years” of our lives in the midst of such absurdity, the jokes are worth repeating.