‘The Driver’ is a complete short horror story by C J Dee,
illustration by Nalini Haynes (aka Nalini Meiyin) 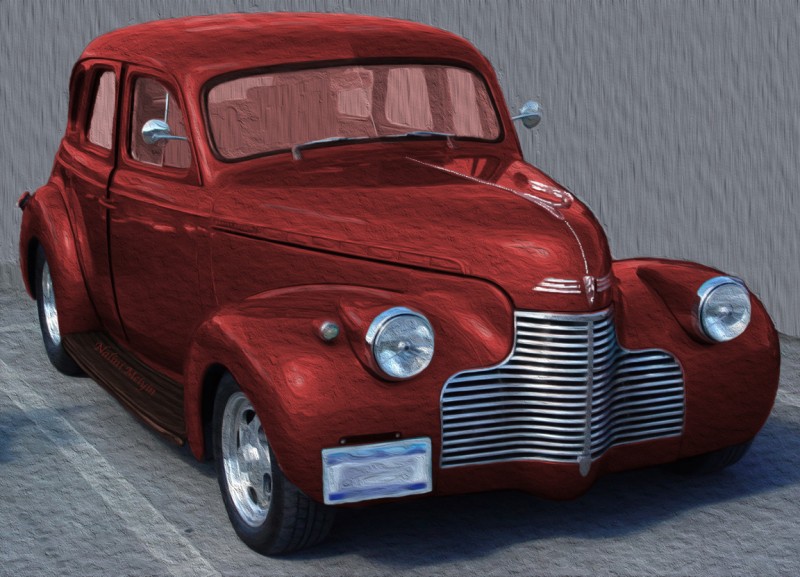 Max stood on the sidewalk, trying desperately to flag down the taxis that were passing him as the rain fell heavily over the city. He pushed his damp, blond hair out of his eyes and pulled his soaked coat tightly around his chest as a car pulled over to stop in front of him. It was no ordinary car.

The red paint glistened on the body of a restored 1940s Chevrolet. The driver opened the passenger side window. His face was obscured by shadow. His voice was barely audible. ‘Need a ride?’

Max hesitated, but only for a moment. ‘Yes. Thank you!’

He tried to open the front door but could not. ‘Back’s unlocked,’ the driver said.

Max opened the backdoor and clambered onto the wide seat. He placed the tulips he was carrying on the seat next to him and told the driver his home address.  Checking his watch, he sighed with relief, realising the delay in being able to get home had not made him too late for dinner with his wife, Alice.

The radio inside the car played only a barely audible static. Max turned his attention from outside to glance at the driver. From what he could make out in the dim lighting of passing street lamps, the driver was a man in his 70s with shoulder-length grey hair straggled over a deeply creased face and a hooked nose.

‘Heavy rain tonight,’ the driver said, almost as if he had sensed Max’s interest and felt a need to reciprocate.

The driver’s voice was thick and deep, rasping slightly as he reached the end of his sentence. Max nodded and smiled politely while attempting to hide his disgust at the foul stench the driver’s breath had caused to waft throughout the vehicle.  Max thought the smell could only be described as decaying fruit with a slight scent of sulphur.

‘A clever young fellow like you is smart enough to head home and stay inside,’ the driver remarked.

‘I’m not, actually. I’m meeting my wife so that we can go to dinner,’ Max choked out, still stifled by the driver’s breath.

Max’s eyes widened at the mention of his wife’s name.

‘I know a great many things, Max,’ said the driver, shrugging his shoulders.

Stopping at the traffic lights, the driver turned his face to Max, revealing what had been hidden behind his straggled grey hair.

Max gasped and quickly pushed himself deep into the back seat at the sight.

The driver’s eyes were pitch black. He had no irises. No whites. Only black. The deep creases in his face that Max had attributed to his age were gaping openings in the flesh of the driver’s face.

‘W-what are you?’ Max stammered, lowering his voice to almost a whisper.

The driver bellowed a loud and rasping laugh, exposing an empty black abyss where his mouth and throat should have been. The abyss was fenced by rotten, yellowed teeth. The driver laughed, emitting a stench that almost caused Max to pass out.

‘What am I? I shall never understand the necessity humans have with labelling that which they cannot comprehend. It neither makes it easier to understand nor protect you from it.’ He smiled.

‘What do you want?’ Max demanded, edging closer to the door.

The driver accelerated suddenly as the traffic light turned green. ‘Want? Max, I already have what I want. I am free to toy with humans. To cause as much havoc as I wish. And let me tell you a little secret,’ the driver lowered his voice to a grating whisper and turned his dark gaze onto Max. ‘I wish to cause … very … much.’

The haze of fear that enveloped Max’s mind parted in a moment of clarity. He scrambled for the lock on the door. The jagged metal of the sabotaged lock sliced through the flesh on his thumb and finger, scraping across the bone. Blood gushed from the wounds. He clutched his wounded hand against his body. He screamed. Doubled over, he vomited on the backseat and floor of the car.

The driver cackled with glee.

Max glared, a strand of vomit dangled from his chin.

‘Well, now look what you have gone and done, Max,’ the driver rasped with his eyes blazing. ‘You have made me hungry.’ The driver smacked his lips. The sound translated into a disgusting slapping sound when it came from the driver’s small, dry lips and hollow mouth.

The comment shook Max to his senses. He lay on his back across the seat. He pulled his legs to his chest and propelled his feet into the glass. The window cracked.

The driver spun his head to face Max and growled. He turned to clutch for Max, tearing the back of his coat.

Max struggled to slide his arms out of his coat as he moved into a sitting position. Once free, he slammed his shoulder into the window at the centre of the cracks, shattering the glass and sending his head and shoulders out into the cold wind and rain.

Max gulped in the fresh air. He felt the driver trying to grab his legs. Max kicked the driver, thrusting himself further out the window. A remnant of the window impaled his belly, raking his flesh. He howled in pain. Max tumbled out the window onto the road.

The door of the vehicle slammed.

Max limped down an alley, his feet and heart pounding in a fast, desperate rhythm. All he could do was hope and pray that he could outrun the driver.

Max reached the end of the alley and ran onto the road. Office buildings towered over him, enveloping him in darkness while the street beneath them stretched out, deserted and barren. Max ran across the road.

The driver followed, his snarling and growling growing louder. Max dodged into another alley hoping it would lead to a crowded street. Max prayed there would be someone—anyone—to save him.

Max ran into a dead-end. He turned. A dark figure loomed before him. Panting, bleeding and terrified, Max fell to his knees.

The driver strolled to Max and bent to face him.

‘I can give you anything you want,’ Max sobbed. ‘Just please let me go. I won’t tell anyone about you, I swear.’

The driver’s only reply was a raspy chuckle.

’What do you want?’ Max screamed.

‘Abandon your hope,’ the driver rasped. ‘My desire cannot be sated or bought. You are mine.’

Max fell to the ground, sobbing.

Alice heard a light rapping at the front door of her stone townhouse. She stood, smoothed her black dress and walked to the door. There was no one there. She leaned against the doorframe, peering out to look up and down the street outside. She noticed that the rain was falling far more heavily than it had a half hour earlier. As she closed the door, Alice noticed something on the front steps. Crouching down, she saw a bunch of tulips, her favourite flowers. Alice picked up the flowers and scanned the street once more.

Still seeing nothing amiss, Alice walked back through her door and closed it. She put the flowers in a vase. Obviously this was just one of Max’s silly jokes, she thought to herself and resumed her seat to watch television until Max arrived. As she reached for the remote, she noticed a strange smell coming from under the couch. As she knelt to investigate, it occurred to her the smell was that of overripe, almost rotting fruit.