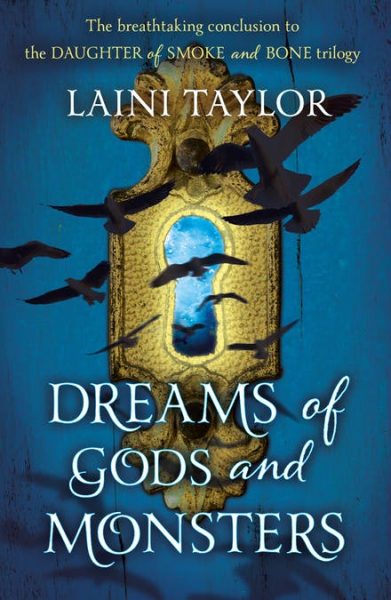 Once upon a time there was a girl with blue hair, Karou, living in Prague. A vampire jumps out at Karou in an alleyway; he’s a human there to scare the tourists. I fell in love with this story. This was Daughter of Smoke and Bone, book one of this trilogy.

Now we’re getting in to spoilers for book one; you have been warned!

Daughter of Smoke and Bone turned out to be a Romeo and Juliet story involving an unusual afterlife. And before the afterlife there were angels and demons except the angels weren’t the good guys. Because, y’know, you shouldn’t judge someone by their looks.

Days of Blood and Starlight followed, escalating the politics, the intrigue, the threat to our world as well as theirs!

Then came Dreams of Gods and Monsters, the conclusion to this epic fantasy. The Chimera (the demon-like creatures) must make a last stand with only hundreds of their numbers remaining against thousands of seraphim (angels). Angels on Earth abuse their place as religious figures to seek access to weapons to wipe out the remaining Chimera and rebellious angels.

Akiva, an  angel and Karou’s Romeo, has allied himself and his remaining family with the Chimera although he’s unsure of Karou’s heart. Akiva is acting out of conscience and moral imperative not to get the girl.

Hope in the form of preserved Chimera souls creates opportunity to restore their tribes but there’s no time to build bodies.

Sinister angels with fire in their eyes search for Akiva to kill him because he’s bruising the sky; unknowingly Akiva is endangering not only their world but ours as well.

Race and gender discrimination in STEM

Eliza engaged my interest: she’s an attractive black woman working in a scientific field whose colleague discriminates against her. As her backstory unfolds, Eliza becomes a fascinating key player, revealing the characters and motivations of those around her. Revelations of Eliza’s identity contrast with humanity’s exuberant if hypocritical reception of the host of angels on Earth.

The stakes are high; some characters are seeking the greater good rather than their personal good and yet the outcome seems inevitably dark. How do you write a gripping novel that subverts the angel/demon tropes while exploring racism and genocide? Any synopsis I write makes Dreams of Gods and Monsters sound depressingly realistic but it really isn’t depressing. There’s hope in the darkness. Romance and entertaining side-characters add flavor. We not only have the Romeo and Juliet-types but some side-kicks that won my heart. Without Willow, Zander and Giles, Buffy would have been dull; likewise Zuzanna and Mik added both consistency and flavour, blending this curry to suit my palate. Delicious!

There are also two endings for readers: if you prefer really open-ended novels, stop at the end of the last chapter. If you want more resolution, read the epilogue. Both endings are good, even with the knowledge that Laini Taylor isn’t planning a sequel trilogy — at least not yet.