WARNING: SPOILERS. This is a children’s book. I feel very strongly about some of the tropes in this CHILDREN’S BOOK so this review includes END OF STORY SPOILERS.

The story starts hopefully with the dragon and her boy – Stick – in close proximity but yet to meet: she’s underground and he’s a tumbler/grifter/thief working the carnival overhead. There’s an earthquake, his friends go missing, and he searches. And finds a dragon trapped underground.

If I’d read this novel as a child I would have mostly enjoyed it while assimilating ableist messages, messages that I am not human and I am not acceptable even in the lowest rungs of society. Then I would have been GUTTED by the end of the story. As an adult I was stunned that, despite foreshadowing, the author actually followed through at the end. With a title like The Dragon And Her Boy, I expected and hoped for a more fulfilling ending.

Apparently the dragon lived, trapped underground, for CENTURIES. Meanwhile, her sisters died because they were also trapped. But, because plot, this dragon frees herself easily when necessary. It’s important to note that the dragon suffered injuries while trapped in a too-small section of tunnel but was fit enough to fly great distances, even while mortally wounded.

Stick has lots of friends, a gang who tumble, beg and pilfer to survive. One of the gang, Squinty, is disabled, probably with a learning disability. All the children are nasty to Squinty, teasing him, mocking him and being exasperated with him. Although they do, at times, try to look after him, there is never any balancing of the scales and definitely no regret or teaching moment regarding their bigoted treatment of him.

Then there’s Tiddy Doll. When I “met” Tiddy Doll I had the impression that she’s much older than the children, possibly even an adult. However, she is tiny so – presumably – has dwarfism. At first the children appreciate her help but later she becomes one of them only to be patronized and mothered by children younger than herself.

Even worse: the villains stuff nearly all the children into bags then throw them down some stairs. Tiddy Doll dies. However, the children emerge, do a roll call – and completely forget about her for a while. Then, when plot-convenient, they discover her body and grieve briefly.

It seems to me this gratuitous violence, a fridging, served no purpose other than to reinforce that the villains are villainous. Which we already knew.

There is no such thing as a happy ending

At the end of The Dragon And Her Boy, Stick takes his place as a knight of the realm. All his friends leave him to return to the gutters of London because there is no place for them in a home whose lord and master loves them and can afford to feed and clothe them. There is a strong sense of “this is the natural order of things”.

This is the same “natural order” that results in overweight upper-classes emulating Scrooge McDuck while children starve and hospitals collapse, healthcare workers dying, because those same upper-classes wanted a pandemic to run rampant “for the economy”.

Let the elderly die for the economy

When Stick meets the dragon, she wants to eat him. But she also wants to die. Throughout the story, the dragon talks about dying. Not because she’s in pain. Nor because she has some debilitating illness robbing her of quality of life. But just because she’s “too old” to go on living.

In the end – sorry but the spoiler alert is right at the top of the page – she asks Stick to kill her. And he does. Because it’s his role as a “true knight” to kill the dragon who helped him vanquish the villain.

She is so fit and capable that, with a lance embedded in her breast, she flies up and off into the sunset to then plunge into the distant sea.

The Dragon And Her Boy seems like an IPA indoctrination guide for children. (The current Wikipedia intro to the IPA is quite descriptive although you need to read further to realize they control, fund and/or their members ARE the Australian government. {Fund like the Koch brothers funded anti-climate change rhetoric for years, which I first learnt on Samantha Bee’s Full Frontal.})

The Dragon And Her Boy’s basic plot is appealing. And who wouldn’t like a dragon appearing in London to assume the mantle of a living herald? However, the ableism and ageism embedded in the story coupled with the unsatisfactory end will distress a lot of young readers.

I cannot recommend this book.

Although I usually donate review books to a local government school library (I can’t house all my review books), I may bin this one.

Children’s books I recommend: How to make a pet monster, The boy, the wolf and the stars, and A wizard in my shed. And, of course, everything written by Wendy Orr. My review of her upcoming book will be published in a few days. 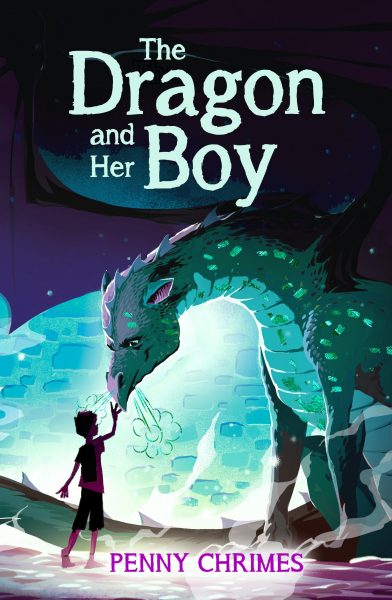