According to Wikipedia, Dragon Age: Dawn of the Seeker is a 2012 Japanese CG anime film directed by Fumihiko Sori and based on the video game series Dragon Age.[1][2]

“In the land of Orlais, a brash young Seeker—Cassandra—fights to stop a blood-soaked conspiracy. Hidden hands seek to tear apart the realm’s most powerful religious order, and as the sinister plot unfolds, Cassandra is accused of treason and murder. Hunted by friend and foe alike, the impulsive beauty must clear her name while clashing with corrupt templars and rogue blood mages. Should she fail, the executioner’s blade awaits. Should she overcome her rage and expose the unseen forces threatening the rule of the Divine, Cassandra will take her place in legend.”

The artwork style varied somewhat: landscapes were often quite beautiful painterly pieces or detailed game-esque cinematics while the characters were drawn in a fairly ‘realistic manga’ style, 3D game-like cartoons lacking the exquisite detail of the first Final Fantasy CGI movie.  Often animated movies have better artwork for backgrounds than foregrounds – it takes a lot of time, effort and money to include convincing detail in human characters – but I found it somewhat distracting when characters looked more like cartoons while their armour was beautifully shaded to emphasise shining armour. 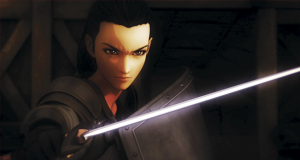 The movie itself didn’t emphasise Cassandra’s beauty although she was impulsive, hence getting herself into trouble.  Cassandra’s armour usually exposed more flesh than the men’s armour and yet it was far from the most exploitative armour I’ve seen.  It was rather contradictory that Cassandra exposed less flesh at formal occasions than she did during combat.

The plot set out to be somewhat convoluted but fell far short of Machiavellian complexity; considering the target market, I think Dragon Age strikes a good balance.  There are politics, romance, a villain to be revealed and lots of bloody fighting to achieve victory.  The last portion of the movie reminded me strongly of gaming: there was the last dungeon, then the end-of-game raids with the final boss fight before the ultimate victory.  This is a definite win for fans who will love the dragon fighting scenes, but in terms of non-gamers, Dragon Age‘s pacing for the climax and wrap-up might drag a little.

On the subject of the target market I’m somewhat ambivalent.  Dragon Age is intended for gamers and fans of the franchise and related franchises, meeting this target well.  Dragon Age is rated MA+ due to blood flying everywhere when people are wounded and one particular scene where limbs are cut off; this was almost Monty Python-esque although I don’t think humour was intended.  If it wasn’t for this justification for the high rating, I’d recommend this movie to high school boys as well as adult gamers.