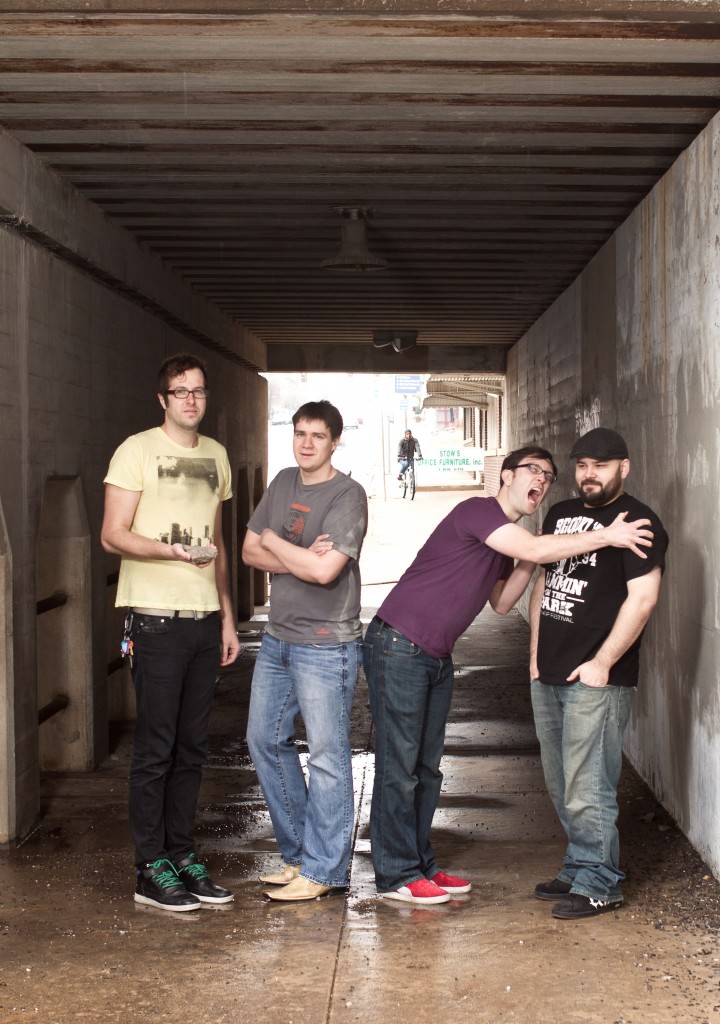 Dr Pants is a nerd power groove rock music band that plays music for nerds by nerds, whether it’s singing that ‘I like Doctor Who’ or about geek dating woes in ‘Robot Spiders’.  David Broyles of Dr Pants talked to Nalini Haynes of Dark Matter about Dr Pants the band, each of the musicians’ careers that brought them together, Jersey Shore and performing in the Bloggess’ Bathroom.

Go to the bottom of the page for the MP3 podcast of the interview.

This is copied directly from Dr Pants’ Bio:

Dr. Pants is David Broyles, Kenneth Murray, Devin Donaldson and Josh Daffron. They are the purveyors of a style known as NERD POWER GROOVE ROCK; Weezer and Beck made a baby with Phish, and that baby is Dr. Pants. These four musicians currently find themselves in the midst of THE TRIP; a double album that they are releasing as four separate EPs. In other words, Dr. Pants are giving the world a double album, one side at a time. THE TRIP, SIDE 1: ILLUSION & TRUTH was released on June 7th. THE TRIP, SIDE 2: BREAKING THE FEEL was brought forth on September 18th. SIDE 3 & SIDE 4 are expected in the new year.

Dr. Pants is the brainchild of guitarist/vocalist/composer David Broyles. With a songwriting style that borrowed initially from the Beatles, R.E.M. and They Might Be Giants, David’s first musical ventures took shape in OKC in the early 90′s, when he started releasing self-produced cassettes and playing acoustic shows in local coffeehouses.  After moving to Santa Fe, NM for college in 1993, David established himself in the Santa Fe coffeehouse scene.

After releasing three more self-produced cassettes in college, and returning to OKC in the fall of 1999, David became much more focused on working with a band and thus, Dr. Pants was born. FEEZLE DAY, the debut Dr. Pants CD, was unleashed in 2000. Towards the end of 2001, David put Dr. Pants on hiatus, since all the other original members had departed, but resurrected it in 2004.   Recording of the album GARDENING IN A TORNADO commenced immediately, as well as a return to the stage with new members Kenneth Murray (guitar), Aaron Vasquez (bass) and Dustin Ragland (drums) (Vasquez parted ways with the band in May, 2o11, and was replaced by Donaldson, and Ragland stepped down in August of 2012, replaced by Daffron). Containing 13 songs that (mostly) found Broyles returning to his songwriting roots, the album was finally released in 2006.  At the end of 2007, GARDENING was named one of Music Connection’s top 25 “demo” recordings of the year. Numerous tracks from the album were also licensed by MTV and featured during broadcasts of “Next” and “Sex…With Mom & Dad.”  Most recently, however, many of the songs from GARDENING have been heard on the pop culture phenomenon known as “Jersey Shore.” The song “Donuts” was also heard on “CBS Sunday Morning.” In 2008, Dr. Pants released THE CUSACK-LOGGINS EP. Then, in 2010, the band became one of the first acts to have their music video shot entirely on the iPhone 4. Directed by Kyle Roberts, the resulting clip for “Sarsaparilla Girl” has garnered over 58,000 views on YouTube.

And now, in 2011 & 2012, Dr. Pants has given us THE TRIP. THE TRIP is just that: a musical journey through two complete albums worth of music. “I set out to write music that told a story, or many stories, and truly reflected all the aspects of a life,” says Broyles. “Whether real or imaginary, fantastic or mundane, these are stories, emotions and songs that continue to fascinate, entertain and move me.”