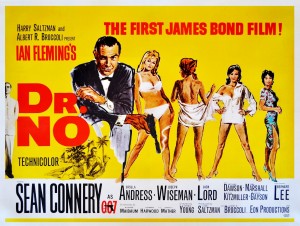 This is going to be a slightly different type of review. I had thought about writing a very traditional type but, in the end, I decided that how this review is written will be how I review all James Bond films from here on out. I understand this style won’t suit everyone but I feel it will allow me to fully express my thoughts on each film while also discussing the usual criteria which goes into a review.

People have often told me that the Bond series didn’t find its rhythm until Goldfinger but when you watch Dr No, the very first James Bond movie, you realise the filmmakers got the formula just right. One of the most famous characters of all time, James Bond has been active in cinema for over 50 years. First released in 1962, only a few years after the series of novels by Ian Fleming, Dr No introduced the movie going audience to British secret agent 007. 30-year-old Sean Connery (maybe 31) was cast in the lead of James Bond; from that moment on it was history in the making.

When I decided to watch and review every (official) James Bond movie from Dr No to Skyfall, I had no idea how much of a challenge it would prove to be. Over the month of July, I’ve watched Dr No a total of seven times as of writing this review, each time learning something new about the film. I guess after that many viewings, you would expect one to get slightly bored with the same film – which could be true for many – but not me.

For the very first time in any review I have written, the following words have never been more accurate:

It starts with a BANG. As James Bond walks across the screen during the opening gun barrel, (surprisingly not played by Sean Connery but stunt double Bob Simmons) to the closing explosive moments, Dr. No had me hooked. The now famous Bond theme kicks in and immediately we are introduced to something a little different here, and as a Bond fan, I fall in love all over again.

I have always said that if I was ever given a time machine (a DeLorean or TARDIS), the only place I’d want to go is back to 1962 and experience the opening night of Dr No for myself with an audience. Just to see how it captivated audiences like it does for me to this very day. Because matter how many times I see Dr No, I’m always in awe of the magic on screen for the next two hours.

More a detective story than action adventure as Bond films would eventually transition into, Dr No follows British secret agent James Bond 007 as he heads to Jamaica to investigate the disappearance of fellow agent, John Strangways. Finding that Strangways was tracking a mysterious radio signal capable of jamming rocket launches at Cape Canaveral, 007, with the help of CIA agent Felix Leiter, heads to the isolated island of Crab Key. It’s here Bond comes face-to-face with the enigmatic Dr No, who plans to disrupt Project Mercury space launch unless 007 can stop him.

Such a basic plot when you consider some of the later 007 films involve body doubles, outer space and mid-sea kidnappings, however, the slower pace and rather elementary plot work wonders for the first James Bond outing on screen. It should be said that although James Bond is a spy, this movie really plays on the detective element. Columbo comes to mind, and until this recent viewing, I never noticed how much.

I’ve always been a big fan of the earlier 007 films as most of my memories growing up were always centred around the later Sean Connery era, however, as I grew up and began watching the later films, I took a turn against the Scottish actor. It was stuck in my head that Connery delivered a boring and very forced approach to the secret agent, which couldn’t be further from the truth. Here in his first outing, Sean Connery proves why every single actor to follow must contend with this initial portrayal of James Bond.

Tall, muscular and with a charming personality, Sean Connery is introduced playing Baccarat and lighting a cigarette with the immortal words, “Bond, James Bond”. I’m pretty sure there has never been an introduction to a character as perfect as this. You could almost be forgiven for believing the producers had a time machine and knew just how iconic the line would become in cinema.

Sean Connery plays James Bond with such charm you could almost forgive him for being such a misogynist. I guess it was a sign of the times and, in that case, the 007 films have not aged well. Looking back to the 60s, I’m sure you’d find many films with common bouts of racism and misogynistic behaviour all over the place. Wait, ‘misogynist’ implies he hates women: Bond is as far from that as possible. He loves women, a little too much I’d say. So lets go with ‘a womaniser’. Yes, that pretty much nails James Bond right there. Then again for a secret agent who could be dead at any moment, I personally believe he’s just living life to the fullest.

Back to Sean Connery as James Bond. I can’t fault the guy. In my many years as a Bond fan, I’ve yet to take the leap into the Ian Fleming novels. Mainly because I’ve grown up on the films and its that James Bond I know, so anything else would be foreign to me. People often say Connery wasn’t a very good ‘Fleming’ Bond but with Director Terence Young moulding Connery in the film Bond, I couldn’t picture the character any other way.

Here in his early 30s, Connery is on his game. Hiding much of the Scottish twang that comes out in his later film roles, Sean has such charisma that he lights up the screen whenever he appears. And in Dr No it’s almost every single scene. The few action scenes that he’s given are handled quite well and, thanks to having a few years of weightlifting under his belt, Connery pulls it off and looks natural doing it. Sadly the same can’t be said about his driving. Apparently Sean never learnt how to drive so most of the time Bond is in a car, he’s the passenger and, the times he is driving, he’s on a sound stage.

Sadly it’s these scenes where I’m most let down. Sean Connery looks like an absolute fool driving to meet Miss Taro while being chased by the three blind mice. The way he holds the steering wheel, you’d think he was driving all over the place, which I’ve noticed was a common problem in early Hollywood driving scenes. Here it’s exceptionally noticeable. Thankfully, Connery gets his licence for later 007 films.

At over 6 feet, Connery is one tall man. He towers over most people in the film and holds himself really well. Starring opposite Connery is Jack Lord as Felix Leiter. Because of the changing actors in the role of Felix, I’ve learnt to never get too comfortable. Lord seems to have that typical American gusto, which fits when you consider Sean Connery is the ‘typical’ British man. Leiter doesn’t really do much on screen except advance the plot and as far as ‘sidekicks’ go, I still prefer Quarrel.

Quarrel is a simple native boatman who aids Bond throughout his Jamaican stay. He is superstitious, funny and tough. I really love the sidekicks in 007 films but Quarrel – as played by John Kitzmiller – is my favourite by far. Like Connery, he seems to be having fun in the role and that translates to an exciting viewing experience.

The primary Bond girl of the film is Honey Ryder as played by Ursula Andress. She is sexy… and sexy… and nothing else. Her thick accent is noticeably dubbed over giving her a stoic feel during the film. I never really found Honey to be a particularly interesting character and don’t get the love for her. Ursula Andress is often praised here as Honey, and I can see the appeal, but doesn’t really interest me for the most part. Thankfully, her scenes come mostly toward the end of Dr No on Crab Key.

Another character I’ve never been fond is the villain of the piece: Dr No. I am yet to see Joseph Wiseman in anything but this role. Here he comes across so robotic and stiff, I find it hard to really care about his motives. I will admit that he does ooze a creepy presence on screen and appears to be a few steps ahead of Bond, but why he lets the secret agent live is a little beyond me. This is a common problem throughout all 007 films.

Rounding out the cast are Bernard Lee as Bond’s superior M and Lois Maxwell as M’s secretary, the gorgeous Moneypenny. What I like about the relationship between Bond and M is the rhythm they have together. Bond may flirt with Moneypenny before entering M’s office but as soon as he enters that room, 007 is the student to M’s principle. It is a wonderful chemistry they share on screen but always so quickly over. Much the same with Moneypenny, it’s all flirt no play.

I feel that production design must be mentioned. Ken Adam outdid himself with each new set piece. From M’s MI6 office to the hotel rooms in Jamaica, all the way to Crab Key’s base. Special mention goes to Dr No’s room where the walls are lined with rocks, a large open fire place and wooden floor boards. A glass window peers out into the ocean (at the cost of 1 million dollars) and the entire area looks so very expensive.

Monty Norman is here on music duties. John Barry helps arrange the James Bond theme, but Norman takes over the rest of the film. Out of all 007 soundtracks, it has to be the weakest but I think thats because it never really strays far from the style at that time. It in no ways feels epic like the later 007 films, and Underneath the Mango Tree is used much too often. Being the weakest doesn’t mean it isn’t enjoyable; far from it. But I will admit that once John Barry comes onboard, the musical scores take a massive leap forward. Sound design is top notch with some absolutely ‘alien’ noises heard during the third act. I’m thinking when Bond crawls through the air vent.

All in all, Dr No proves to be one of the best 007 films. It may be 52 years old this year but I’d like to think that it easily still holds up to this very day. Watching it for this very review, I wasn’t ever looking at the time. I was engaged and mesmerised by Sean Connery as James Bond. It may be a little slow for some people, but the detective elements are quite strong and, with all the beautiful locations Bond visits, make for a highly enjoyable film, and an excellent 007 outing.

Dr No is a solid beginning to the 007 franchise and one of Connery’s best.

James Bond will return in From Russia With Love.