Shit-stick is a stoner sloth type who’s giving his cousin Evan a driving lesson before they settle in to watch Lord of the Rings that evening. Evan has Downs Syndrome but he’s a happy guy, looking forward to watching the trilogy that he hasn’t seen.

Shit-stick has some ‘friends’ who want to borrow his car and his body to go ‘Leb hunting’ after the first day of the Cronulla riots in 2005.

Hassim is studying for his final exam tomorrow; he’s at university and doing well. His mates want to go down to Cronulla to ‘defend’ Lebanese honor. Hassim’s brother Farouk is missing; they’re worried he’s dead in a ditch somewhere.

Violent and sweary versions of the Sharks and the Jets assemble with no romance and no musical numbers in sight. What follows is the single most intelligent, funny, literary expose of racism in Australia I’ve ever seen or read.

Ever had a family member who makes you cringe?

Ever laughed at a wildly inappropriate joke and felt guilty?

Ever felt the cultural cringe?

Down Under incites all that and more.

There were scenes where I wanted to walk out of the cinema and yet I knew what was depicted was true to life. I know people like the skippies (white Australians) who were cruising in their bomb (clapped-out car) cruising for trouble. I’ve heard similar racist diatribe. Pauline Hanson is ba-ack (in the Australian senate). This racism is real and current although the riots were a decade ago.

The violence in the movie — physical and psychological — left me feeling like I’d been assaulted at the end although I laughed many times throughout.

How can you make racism funny? How can it be worthwhile to watch?

And see the final scene, a scene so punchy and poignant that it’ll stay with you.

There is no ‘colorface’: every actor is of the nationality they portray. No Americans play white Australians, no skippies or Greeks play Lebanese. The actor with Downs Syndrome is for real: he actually does have Downs Syndrome. It’s extremely rare to see authentic casting of disability. It’s excellent.

After a week of considering Down Under from all sides, I can find no fault with the story or the execution.

Down Under is a masterpiece of storytelling; it’s literary, intelligent, gritty and real, while giving a good dose of sugar — humor* — to make the medicine go down. I highly recommend that everyone, no matter your race or country, watch this movie. The underlying truths exposed are universal. Down Under should be part of every high school curriculum and part of rehabilitation programs for every person guilty of antisocial behavior* motivated by racism. Everyday Australians need to see this movie.

* I know I’ve used US spelling not Australian. Sorry guys but US people visit this website more than Aussies. 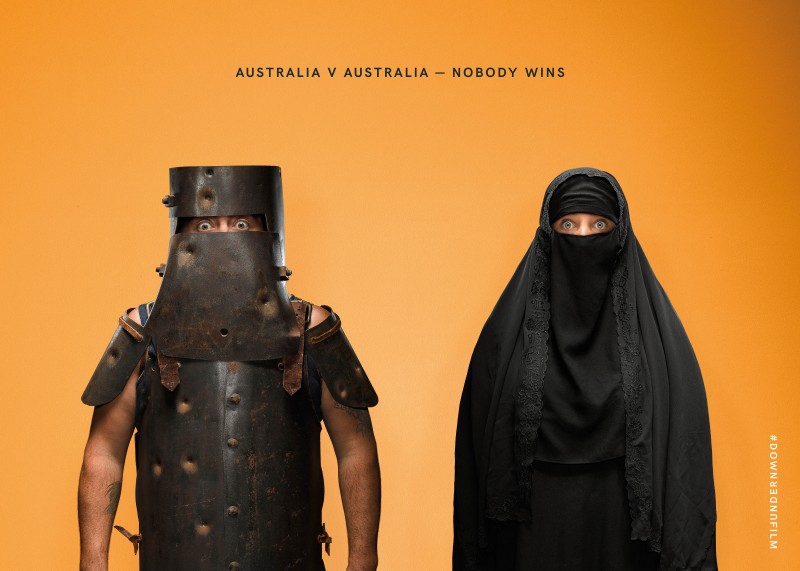