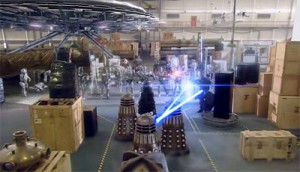 At the close of ‘Army of Ghosts’ the ghosts were exposed as cybermen. Cybermen also lurked in substantial form within the plastic-sheeted area inside Torchwood, trapping not-yet-Martha and her boyfriend, turning them into Cyber-agents when they went for a snog during work hours. As you do.

Daleks emerged from the Void Ship in Torchwood’s basement, right in front of Rose, Mickey – who just popped over from the other universe – and a scientist. Threatening to exterminate them, the daleks herded the humans back, back, back – until Rose pushes forward, telling them she has information about the Dalek Emperor.

If I’d been that dalek I think I would have shot Rose on the spot when she declared she’d disintegrated the Dalek Emperor.

Risk pieces on the board, the stage is set for a confrontation between the cybermen and the daleks while the Doctor lurks in the absence of shadows, preparing to foil their dastardly plans.

Rose’s dad and a few of his mates pop over from the other universe for a chat.

The Doctor gets a little pissy that all this popping backwards and forwards is cracking the glass pane that separates the worlds. Inter-universe travel is blamed for global warming.

Although this was an idea of epic proportions, the execution was a bit of a fizzer, the wrap-up almost an anti-climax. When I googled ‘Doomsday’ for a pic, all the images were of Rose sobbing while leaning on a wall or the Doctor looking wistful; that pretty much establishes the real focus of this story. I had to add keywords like ‘cybermen’ and ‘dalek’ to get the above pic.

Having said that, the cyber/dalek war was a great idea. The verbal and violent pissing contest between mechanical species was fun while it lasted. The wrap-up for the season was a bit melodramatic but it was in character for the season.