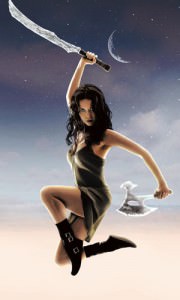 The first I heard of this story was when a professor of English at a college in the US had come under fire for putting a quote outside his office. The quote was from the pilot episode of Firefly where Mal Reynolds tells Simon Tan that Mal will only ever kill Simon if he’s armed and facing Mal. What was said doesn’t appear unreasonable to me even if someone is ignorant of the significance of the quote – my understanding is that citizens of the US are permitted to defend themselves. Anyway, not only was the quote removed but the professor was given a warning. In response the professor put up an anti-fascism poster, which was taken down and further threats or warnings were given.

You don’t mess with Firefly.

This new video on YouTube recounts the campaign for free speech, partially motivated by love of Firefly and knowledge of how ridiculous the position of Campus authorities was. Even more so when you consider that this censoring of free speech could detrimentally impact the professor’s ability to teach.

Neil Gaiman got involved, among others.

Watch the video: it was a victory for free speech and Firefly fans everywhere.