Doctors Revisited vol 2: Remembrance of the Daleks features Sylvester McCoy as the Doctor with Sophie Aldred as his companion Ace, complete with boom box, badge-swathed jacket and a baseball bat poking out from her backpack.

The Doctor and Ace arrive in 1963, a few short months after Doctor Who’s pilot took place. Fascinated by a van with a crude television aerial, the Doctor sends Ace to buy food – after giving her money – while he jumps on top of the van. Apparently the woman inside is so oblivious she doesn’t notice.

The military and their scientific advisor Professor Rachel Jensen are investigating anomalies centred around a school, the same school Susan (the Doctor’s granddaughter) attended at which Barbara and Ian taught.

After the Doctor barges his way into the van, the Professor accepts his presence apparently without question. Jansen receives an urgent summons, rushing the van – Doctor and all – to a scrapyard apparently owned by I M Foreman (the original Doctor’s scrapyard although remarkably dissimilar because this scrapyard isn’t in a tiny studio).

The Doctor sees a corpse and identifies the murderer as a dalek. The dalek doesn’t shoot at the Doctor while he checks the body but when soldiers move the corpse, the dalek kills them.

Meanwhile, Ace goes to a café to order food. A good-looking young man introduces himself and leans over Ace as if to kiss her before calling for the café owner to serve her. Ace finds his patronising attitude and invasion of her personal space attractive.

Remembrance of the Daleks has significant plot holes like when the Doctor goes to destroy the transmat beam but apparently forgets, leaving it until the next day.

I’m puzzled as to how the Doctor deducted there were two factions of daleks because the very existence of mutant daleks breaks the dalek canon regarding purity and the master race. In this and other stories like Death to the Daleks, the daleks use ‘lesser races’ as servants before killing them but daleks never forget they are the master race. Under Stephen Moffat daleks have irrevocably altered; I’m speaking about pre-Moffat canon and decades of Doctor Who lore. 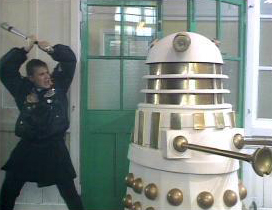 Plot holes are largely forgiven because this episode has sheer attitude. Daleks glide up stairs, answering the old jokes asking how a master race unable to move without wheelchair ramps managed to rule the universe. Even better, the Doctor amps up Ace’s baseball bat that she uses to attack daleks, inflicting considerable damage with attitude! Comic elements are carried well throughout the story.

Remembrance of the Daleks is a nod to Doctor Who’s history with lots of historical references for the fans while progressing daleks to the next stage with new SFX. Humour and attitude – especially Ace’s attitude – carry the story in spite of plot holes. Altogether a fun story and a ‘zode not to be missed by fans.