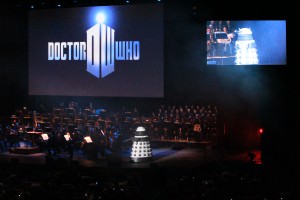 Once upon a time there was a small inquisitive girl who, when visiting her Grandma, saw Doctor Who on TV. This TV show was so terrifying and yet so fascinating to this three year old, that she hid behind her uncle’s chair, poking her blonde curls and eyes out just enough so that she could see but not be seen by the scary monsters. This was the beginning of my life-long love of science fiction and Doctor Who.

Doctor Who at the Proms was a spectacularly successful mash up of Doctor Who and live orchestral performance, incredibly successful in London in 2010. This inspired the Melbourne Symphony Orchestra to emulate the London performance in order to entice both MSO and Doctor Who fans in to experience a similar event.

Schlepping in from the burbs on the train, it was interesting and exciting to see the number of fellow passengers wearing Doctor Who paraphernalia (hats, tees etc), although I was on the receiving end of a few disapproving looks for my Doctor Pooh tee – a mash-up of Winnie the Pooh with Tom Baker – I think it’s cute! Alighting at Southern Cross station, the crowds surged and swarmed towards the Melbourne Convention Centre. Picking up our tickets and loot bag was a fairly streamlined process but queues for door sales were pretty long.

For those unfamiliar with the venue, there is a huge hall with tiered seating that opens up in sections, each section accessed from doors located in the enormous foyer and successive floors embracing the hall. Walking swiftly along, we came to our door and found our seats painlessly; the crowds were orderly and ushers organised.

The performance began without too much delay. Mark Sheppard, an actor who played a character who briefly recurred in the recent series of Doctor Who, acted as MC, with a tight script aimed at supporting this event as a Melbourne Symphony Orchestra event where they were playing music from Doctor Who. This distinction is important: it seemed to me that this was less of a Doctor Who experience and more of a means to educate Doctor Who fans into appreciation of the MSO, especially when you take into account comments made in commentaries on YouTube. Mark is a good actor and a welcome guest at science fiction events in Melbourne; I am sure he could have added anecdotes and sparkle to his performance to embellish the experience for the thousands of Doctor Who fans who attended in the hope that this would be a sister performance to that in London. Instead I had the impression Mark was working to a clearly defined and tight script.

While I think Mark is a fantastic actor and great guest for events in Melbourne, to me he is not the face of Doctor Who. I saw portions of the original event fronted by Matt Smith, Karen Gillan and Arthur Darvill. These actors are the current faces of Doctor Who, but even a previous Doctor or companion, or John Barrowman or John Sims, would have been more appropriate faces to represent Doctor Who at this event. Matt Smith’s pre-recorded (brief) message on the big screen received a greater emotional response than Mark Sheppard. 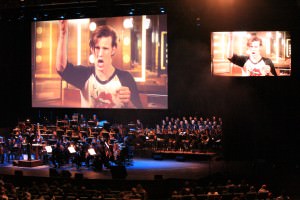 The Melbourne Symphony Orchestra was live, skilled musicians with their instruments sitting on the stage below the big screen creating an immersive experience. Quality of sound was superior to the best stereo, embracing the audience. For many, seeing the instruments playing the music would have been a unique experience, especially the younger members of the audience. At times close ups of the musicians were displayed on the big screens, but most of the time at least one of the screens showed Doctor Who clips.

After the first couple of musical items, various aliens, villains or heroes from Doctor Who emerged, walking around the auditorium in the aisles. Usually there were only one or two alien races at a time. Walking interspersed with posing added a theatrical element to the performance. In London various sets, such as the TARDIS on stage or Amy’s swing set were displayed in the auditorium, adding a theatrical air to the performance, however these touches were absent from the performance in Melbourne. Lights were blended with costumes for performances such as the Ood standing on stage during an Ood tribute, or the Cybermen standing on either side of the stage during clips and theme music from Closing Time to create a theatrical atmosphere. 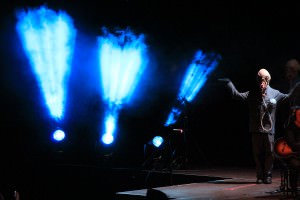 During the break queues for the inadequate toilet facilities stretched literally across the foyer, moving very slowly. In anticipation of an inordinately long wait, I walked into the expo centre next door, finding the toilets there were accessible during the brief interval. I also purchased a coffee in this building before walking back into the building housing the plenary hall, admiring the queues for loos and coffees, telling a few complete strangers that they should try next door. The bells rang. The performance was to continue, so we filed back to our seats.

Although Davros did not make an appearance (unlike in London), the daleks (the Maccas toy versions) invaded, taking over the venue, with a blue plastic dalek issuing warnings and instructions from the big screen with a background of the foyer before the daleks entered the plenary hall. Daleks instructed the conductor to play only ‘dalek music’. This was the most interactive and fannishly delightful aspect of the afternoon. In another particular number it seemed nearly all the monsters came out at once to parade around, but they didn’t engage in a Pandorica confrontation or otherwise interact with the audience.

The downside of a live performance is that errors are also live and another ‘take’ is impossible. Late in the performance the MSO was supposed to play the musical score to excerpts from the 2011 Christmas special, but something went wrong. A few times. The video played without any musical accompaniment then, some minutes in, paused to be partially rewound then restarted. Still no musical accompaniment. Pause. Partial rewind. People started dashing around on stage, someone walked out to talk to the conductor. As the crowd became restless, ambient noise levels rose until a man yelled out ‘just play it!’ I’m not sure whether he just wanted the visuals if we couldn’t have the sound or if he was telling the orchestra to just get on with it, but shortly after that the performance resumed, some minutes from the beginning of the video clip.

The Doctor Who Symphonic Spectacular had a great atmosphere made all the more immersive by being surrounded by the music with the musicians playing on stage. This led up to what I expected to be an absolutely amazing finale. The audience craned their necks, searching for the characters who were going to delight and threaten us in the finale, but the finale was pure music with some clips on the big screen.

Ben Foster, conductor and orchestrator for the London Proms performance, says, ‘The Proms is all about accessibility and bringing people into classical music.’  (I previously had a link to an official BBC video but it’s since been blocked by BBC Worldwide on copyright grounds.  They may have rethought the condescending tone taken in this video release, or they may have removed it to boost DVD sales.)

Roger Wright says, ‘In addition, it’s a great big theatrical event’ and Matt Smith said, ‘It does feel like theatre’. I would have thought, if the goal was to ‘educate’ us, that they would have been selling CDs of Doctor Who music as, let’s face it, not many of us will spend well over $100 per ticket for a 2.5 hour performance (plus interval) very often. Personally, when concert tickets are anywhere around $100, I start thinking of all the other things I could do with that money, including buying CDs.

Overall this was an enjoyable well executed performance, although I had expected something a bit more interactive and theatrical, especially for the finale.