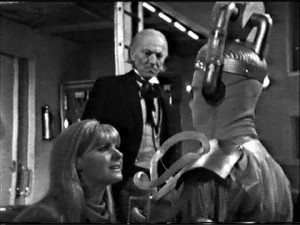 The Doctor (William Hartnell), Polly (Anneke Wills) and Ben (Michael Craze) arrive on the South Pole of Earth near a Houston-like space center in 1986, twenty years after the episode was made. Upon arrival, General Cutler (Robert Beatty) arrests them. A spaceship in flight is in trouble, losing power for no apparent reason. An asteroid – the tenth planet – is discovered approaching Earth; its continental formations are similar to those of Earth. The Doctor anticipates the arrival of alien visitors from this planet but his attempts to warn the military are greeted with suspicion.

‘The Tenth Planet’ is a 1966 Doctor Who story so I was impressed with the tension as the plot escalates. This story is far superior to early Star Trek with its focus on Captain Kirk’s deep and meaningful looks (dun, dun, DUN).

The special effects and costumes were excellent considering the era and the budget. Meaning, of course, that they’re laughable by today’s standards but without early Who as a forerunner we wouldn’t have today’s science fiction series. They’re also very interesting from a historical perspective.

The cybermen’s costumes were both excellent and appalling. Plastic raincoats doubled as radiation-protection gear and cybermen’s skin with additional paraphernalia foreshadowing the cybermen’s evolution in the 47 years since. White stockings over their heads with holes revealing blackened skin surrounding eyes and mouths made the cybermen look like the Black and White Minstrels in reverse. While this comparison chilled me, today’s cybermen – with dark holes for speaker-mesh mouths and glowing orifices for eyes – made the original form more palatable.

Fundamental errors were made with regards to space travel and the location of ground control because NINETEEN-SIXTY-SIX. Their vision of the future was fascinating although inaccurate.

Film of the final quarter of this story was lost so the BBC used the original soundtrack alongside animated visuals to complete the episode. As with other animated episodes, it appears they’ve reconstructed the visuals based on photographic records. Generally the animation is excellent – I particularly love some of the faces rendered into black and white – but the mouth movements often reminded me of Gort king of the Thargoids (in The Kenny Everett Video Cassette’s Captain Kremmen cartoon series).

The animation is a worthy solution to the never-ending saga of missing episodes. Overall, the story may suffer from ancient special effects and low-budget costumes but the plot is superior to many in New Who.

And the extras, THE EXTRAS. If you’re a fan, you need this for THE EXTRAS.

First cab off the rank is the surviving portion of an interview with William Hartnell chatting with a journo on film while putting on makeup for his then-current performance in a pantomime. By this stage he’d left Who and was looking to the future. Although he appears somewhat irascible and opinionated in the interview, his manner of speaking is noticeably different to that of his portrayal of the Doctor.

Most of the other extras feature various companions talking about their experiences in Who and opinions of Who.

Elisabeth Sladen (Sarah Jane, companion to the third and fourth doctors) talks about screaming being the appropriate, realistic reaction to monsters.

A psychologist talks about the companions, realistic responses to danger, the foundational relationship of the doctor rescuing companions when they meet and the likelihood of companions staying with the doctor long-term if this was real. This portion was a real highlight to me as a former mental health specialist, a passionate amateur sociologist and student of human nature.

‘The Golden Years’ is a controversial extra. A talking head from behind the scenes in Doctor Who responds to critics. Meaningless statistics are flashed up on the screen without context. Over time Doctor Who has increased potential to reach a larger audience due to higher population densities and Doctor Who’s ready availability in more countries. No mention was made of these mitigating factors. I struggled to read the pale yellow writing on the grey background. At one point I started wondering what, exactly, these figures represented anyway.

The talking head responds to criticism of Doctor Who ‘not being what it was’; his justification for the current absurd hole-riddled plots being that Doctor Who used to have silly stories (queue a scene from a Peter Davison episode) as well as entire seasons of Doctor Who that struggled (queue a scene with Sylvester McCoy as the Doctor). No mention is made of some writers’ admissions that they’ve thrown a script for New Who together in one day. The same team works on Sherlock, demonstrating their ability to respect that audience… grrr

My other objection to this little extra is the newspaper pages that are thrown up on screen to illustrate the talking head’s points. They’re so small even a non-disabled person would struggle to read the headlines let alone the articles. I, of course, remain completely ignorant of what the headlines were because he didn’t read the headlines out. The BBC usually offers audio navigation on their DVDs but apparently that doesn’t include verbalising teeny tiny text. The director could have put the headlines up without the body text, thereby allowing sufficient room to enlarge the headlines significantly.

Overall I enjoyed ‘The Tenth Planet’ for its plot and historical significance. The extras are particularly good, especially the combination of companions and the psychologist. Dedicated fans will NEED the William Hartnell interview, rare surviving footage. I felt ‘The Golden Years’ was a patronising response to the critics masquerading as ‘bonus’ material. ‘Bogus’ material, more like. Still, over 90% of this two-disc set gets my stamp of approval. 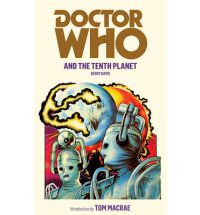