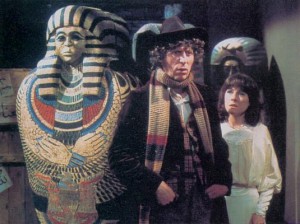 ‘The Pyramids of Mars’ was one of the oft-repeated episodes of Doctor Who while I was growing up. Re-watching it confirmed my earlier impressions of the story: it’s an SF starter for Egyptian mythology mixed with fantasy and, of course, the Doctor Who mythos.

Tom Baker is the Doctor with his companion Sarah Jane (Elisabeth Sladen) who, coincidentally, raided the TARDIS wardrobe for an Elizabethan dress just prior to the TARDIS being waylaid, diverted to UNIT headquarters several decades prior to UNIT’s inception.

The diversion is caused by Sutekh’s partial liberation. Sutekh is an Osiran, a long-lived super-race that, strangely, became extinct after Horace and the rest of the Osirans imprisoned Sutekh thousands of years ago. Sutekh was imprisoned in an Egyptian tomb on Earth, radio-controlled from a Pyramid on Mars. (The logic – or lack thereof – is not addressed.)

Mummies walk but, in the Doctor Who style of this era, this is less supernatural than super-human science: the mummies are service robots. These robots build a pyramid-shaped spaceship that looks less than atmosphere-capable in between sandwiching their victims.

A mummy sandwich is two mummies squishing a poacher between them; not a particularly efficient method of killing someone but apparently effective. As a child I found this chilling; as an adult I couldn’t help but laugh out loud. I’m also noticing a theme: poachers tend to be killed in Doctor Who (see ‘Spearhead from Space’ for another poacher death).

The Doctor impersonates a mummy/service robot. In the extras for the ‘Terror of the Zygons’, Elizabeth Sladen and others talked about Tom Baker’s reluctance to don the mummy costume. The scenes with him in costume are so brief and yet his body language shines through, making this bit of added realism well worth the effort.

Sarah wanders around in a pristine cream ankle-length dress that never seems to dirty or tear in spite of tumbles in the woods, climbing through windows and generally racing around the countryside. Elizabeth Sladen managing such an active role encumbered by such delicate and inhibiting clothing is a testament to her abilities.

When the time comes for some sharp-shooting – shooting the nitroglycerine the Doctor leaves on the space-ship’s base – Sarah is the woman! I felt like standing up and cheering as Sarah handled the gun efficiently and fired accurately.

I enjoyed ‘Pyramids of Mars’ as a child and again as an adult. The story doesn’t hold together on close examination and yet it’s a classic blend of SF and fantasy. I started wondering how much this story influenced Stargate.

The same issue with the other Doctors Revisited stories applies to ‘Pyramids of Mars’: the central portion of the screen seems to be in the correct ratio but the edges of the image have been stretched. With frequent sideways panning of the camera for this story, this lack of consistency was really annoying and distracting. The number of times the camera pans across the exterior of the Priory with all its narrow windows, expanding and retracting and expanding again as they cross the TV screen… AAARGH. I want to SMACK the person who decided this would be a good idea.

The extras were interesting and perplexing at the same time. There was more focus on Leela (Louise Jameson) and K9 (John Leeson) than on the ‘Pyramids of Mars’ with Elizabeth Sladen. I don’t understand why the BBC didn’t put the ‘Pyramids of Mars’ snippets and footage from the ‘Terror of the Zygons’ with this story.

Furthermore there was a definite attempt to reframe Louise Jameson’s relationship with Tom Baker although the BBC didn’t quite claim that they were all a happy family.

I think this was the first time I saw Stephen Moffat in any Doctor Who extras where he didn’t say that classic Doctor Who stories are silly.