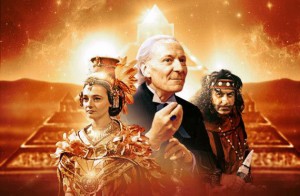 An epic bundle – eleven discs in all – arrived last week for review. The Doctors Revisited will be available on 20 November 2013, in time for the 50th anniversary. I began my historical journey at the beginning; the first disc features ‘The Aztecs’.

Disc 1 opens with the extras. Discussion of Doctor Who in general, with Stephen Moffat talking as if he hadn’t watched traditional Who until after New Who was established. He also seems to believe that his changes are improvements.

Anneke Wills (Polly, companion to the first and second doctors) talks about her experiences, including earning William Hartnell’s ire on occasion. Apparently he was difficult and demanding.

Anneke also talks about her time working with Patrick Troughton and some of the pranks they played, including one of which backfired. Anneke’s character Polly and the other companion, Ben, come under scrutiny.

Snippets from scenes are shown including what may be Nicholas Courtney’s first appearance in Doctor Who although not as the Brigadier.

The TARDIS lands in a fifteenth century Aztec tomb before the Spaniards invade South America. Barbara is mistaken for the physical embodiment of the god Yetaxa. She sees this as an opportunity to change history, ending human sacrifice before Cortez uses human sacrifice to justify the destruction of Aztec culture.

The high priest of sacrifice Tlotoxl is not happy; he plots and schemes to destroy Barbara, putting his minions in positions of power to reinforce his position. Ian is tricked into competing for the position of the head of the armies; you win or you die.

Susan is vulnerable as an independent young woman of marriageable age, thus introducing discussion of gender roles. IN 1964. Win.

The TARDIS is behind a sealed door: to escape the crew must find another way back while evading murderous natives.

Danny Oz discussed ‘The Aztecs’ in his guest blog ‘Playing safe in Doctor Who’, mentioning, in passing, the issue of fault in this story. In this episode, the BBC seems confident in white supremacy, unashamedly implying Barbara’s attempt to change history to ‘save’ the Aztecs was appropriate.

Although individual human sacrifices voiced their willingness, even desire, to be sacrificed, this is interpreted as foiling Barbara’s good intentions. The right to choose their own destiny is not discussed.

PS Below is the cover from an earlier release of this story.