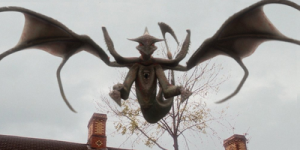 The Doctor (Eccleston) offers to take Rose (Piper) anywhere and anywhen. Rose wants to go back to the day her father died, 1987, so her father doesn’t have to die alone while waiting for an ambulance. The Doctor agrees.

Back in 1987, the Doctor and Rose wait on the footpath near where Rose’s father will get hit by a car. When the time comes, Rose can’t cope, she runs away.

They try again: this time the Doctor and Rose hide around a corner watching themselves waiting for the accident. When the time comes, instead of sitting with her father while he’s dying, Rose runs out early, saving her father before her former self vanishes into flame.

The Doctor is furious.

Survivors run into the church where friends of Rose’s family are supposed to be getting married.

The Doctor says the building protects them because it’s old and these creatures are out of time. Formerly held in check by the Time Lords, now they’re free to act as anti-bacterials cleansing a wound in time. Not that this explains how the Doctor and Rose continue saving people through the rest of history with impunity but it kinda makes sense within this particular episode.

While Earth is ‘cleansed’ of people – all vanished by these creatures – the survivors huddle in the church. The Doctor plans to help them escape in the TARDIS.

The church withstands their repeated attacks, protecting those within until a paradox allows the creatures in…

Season One of New Who keeps its family audience firmly in mind, balancing horror themes against the BBC’s desire to attract children as viewers to enlarge their audience. The BBC is encouraging generations of fans to bring up children in the way they should go that they will not depart from it – and that Doctor Who‘s ratings will build into this brave new century. ‘Father’s Day’ is light and fast-paced while it develops relationships: the Doctor and Rose’s, Rose with her parents and Mickey. The underlying theme of accepting the inevitable while trying not to have regrets gives this story real heart. Highly recommended for family viewing.