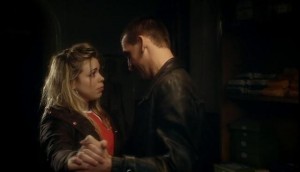 The Doctor Dances is part two of the story started in The Empty Child, where the Doctor and Rose arrive in 1941 London to search for an alien ship that sent a distress beacon as it travelled through time. If you haven’t seen The Empty Child, Ware Spoilers in this review!

Racing around the hospital, the Doctor and Captain Jack have a pissing contest over sonics. Captain Jack is also somewhat pissed off to realize he can’t acquire another sonic weapon because the Doctor visited the factory once. And, of course, time travelers can’t visit a place before it’s destroyed. Ah well, it made for good comedy as a counterpoint to fleeing monsters.

This episode is part mystery, part horror and part comedy as the Doctor figures out how the empty child plague came into being so he can stop it spreading. Racing towards the conclusion the plot holes get more outrageous but the fun doesn’t stop.

Captain Jack teleported a live bomb onto his ship? Really? He could have dumped it somewhere safe like the river or the ocean; this was deus ex machina, a plot device to excuse what follows. This is far from the only plot hole or detail mismatching the story – blackout in London, anyone? – but at the end of the story after the climax, this one stands out like a sore thumb.

Captain Jack is a fun addition to this story, adding zest and comedy to a horror/mystery. The Doctor Dances is eminently suitable for a family audience – even those for whom the gas masks appearing in the Empty Child may have been a bit much. The Doctor Dances emphasizes who the Doctor is and how much pain and sorrow he’s seen by the mere fact of his joyous reaction to the end of the story. Highly recommended.