Slate is a dispossessed foster kid in LA when Malice collects him to take him to his family in New Zealand. Apparently Malice only just found him after looking for years. Within an hour of his departure, agents arrive to abduct him and murder his foster parents. (Mejia never explains their motive for murder other than “bad guys”. Nor does she explain the timing.)

Warnner is an unwanted child – very forgettable child? – in an institution. The administrator takes an interest so takes him to a fair. This creeped me out it was all above board. Even if it was rather strange to take the kid out of the institution and let him wander unsupervised. While there, Warner meets supernatural beings who invite him to join them at The Hill.

Siren grew up on The Hill and has never left because she’s always been too conspicuous in the Common world. She knows her world, she knows her people, and she’s Slate’s cousin. However, Slate freaks out when he sees how different the Dispossessed are.

Meanwhile, the murdery agents close in. They’re hunting Slate and a few specific others as well as generally not liking the Dispossessed. Although “not liking” may be an understatement.

Although a few pieces of the jigsaw don’t sit right for me, what follows is an engaging plot in the subgenre of Dark Angel season 2, Buffy and Angel’s underworld, The Gifted, Marvel’s Runaways etc, in a coming-of-age story. There’s also a love triangle.

Dispossessed is one of those light escapist reads to distract you from the Terrible Twenties.

However, it’s not all beer and skittles.

Dispossessed is based on Maori (Indigenous peoples of New Zealand) spiritual beliefs. I like to know the author either belongs to the minority culture she’s representing or has consulted readers in that culture. Based on my research and comments made in interviews, it appears Mejia is a white author who writes cultures she believes she “knows”.

“I like to write feminist horror in which my protagonists are more often women, from a range of cultures (of which I am familiar)” – Meija in GingerNutsOfHorror.

While I enjoyed the story on a superficial level, even before I researched the author I had concerns. In Australia, the Arts Council stipulates protocols when using Indigenous characters and culture. These protocols include the following:

There are many more protocols but I think these are the most relevant.

Although based on Maori culture, the Dispossessed as a people within this story are other, set apart from Maoris who barely feature in the story. I felt Maoris were almost erased from their own story.

Add to that the joyful recreational violence of the Dispossessed, which included deliberate maiming and inflicting potentially life-threatening injuries upon their own tribe without censure. In the build-up to a life-threatening conflict I expect training exercises alongside a total ban on deliberately injuring and maiming one another. Serious injuries reduce their chances for survival as a individuals and a tribe/species. I wonder if Mejia intends this violence as a reflection of contemporary Maori. Maori marginalization inflicts the “usual” social symptoms.

To counterpoint: apparently the author advocates and trains other emerging writers.

These days it is offensive to use the word “Gypsy” as the correct term is “Traveler” or “Romany”. Mejia uses the term a few times in reference to carnival folk. She likens the Dispossessed to Travelers.

Mejia represents women fairly equally as villains and “good guys”. However, the group’s leader, Grandfather, is a man. In contrast, the group’s Grandmother lives alone, isolated, in service to the community, caring for a zoo of mentally ill Dispossessed. This appears to be a twist on the “mad woman in the attic” trope.

Siren is a strong capable character but she contends with her cousin. Slate wants to fight her love interest for her sexual interest. She doesn’t challenge him or in any way point out how ICKY this is. Nor does anyone else. Shades of Game of Thrones.

Dispossessed is a supernatural coming-of-age emerging identity story mostly set in New Zealand. It’s a light quick read as novellas generally are. It’s good escapist fantasy with a tart tangy Kiwi flavor. Read this if you’re a fan of The Gifted and Marvel’s Runaways. But be warned: Dispossessed has a bit of the feel of Maria Lewis’s Who’s Afraid; at least Lewis is, apparently, half Maori. 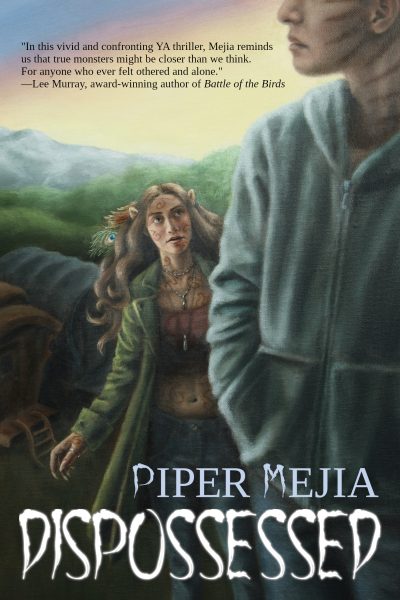