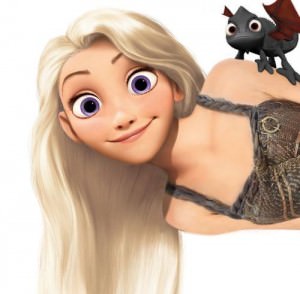 Unless you’ve been hiding under a rock or been shipwrecked on a desert island, you’ve probably heard that Disney bought Star Wars then promptly made huge changes like axing the animated Clone Wars series and canning the spin-off comedy series that was ‘coming soon’, replacing it with the long-awaited ‘sequels’.  HBO Watch followed up with the above image, an imagining of Game of Thrones a la Disney.

Although I enjoyed How to tame your dragon the movie and loved the Arena Spectacular, my initial reaction to a Disneyfied GoT was a shudder.  Then I started thinking…  Recently I’ve been watching season two on bluray.  I’m so over the gratuitous sex scenes parading female nudity for the male gaze.  Men’s pecs are far less frequently spotted in GoT that either naked breasts or bums, less frequent even than girl-on-girl action in Little Finger’s brothel.  In a recently watched episode, the scenes skip from gratuitous exposure of Melisandre’s body in a Melisandre/Stanis sex scene where the only bare flesh from Stanis is hands and head, the kind atop his torso.  While that sex scene took place in the novel and is relevant to the plot, the next two sex scenes are entirely gratuitous, brief glimpses within the aforementioned brothel before cutting to a conversation between Little Finger and Ros.  Presumably the audience is so dim-witted we can’t figure out that we’ve cut to the brothel without gratuitous sex.

The production values of Game of Thrones are excellent but the never-ending parade of female flesh for the male gaze detracts from the over-all storytelling.  A portion of the audience is jolted out of the story with the constant reminder that ‘this is not for YOU, this for THE MALE GAZE.’  Furthermore, sex scenes are shoe-horned in while sacrificing plot-related scenes.

A Disney version would, at least, take the focus off the sex and hopefully return the focus to the actual plot.

And no, I haven’t heard anything about a real takeover.

I’m not alone in my perspective of Game of Thrones.