This is not part of my three-part response to Lionel Shriver. This is a blog about yesterday and living as disabled; I am trying to reclaim my headspace so I can prepare for an important meeting tomorrow. Please note: there haven’t been posts for a few days because I had a weekend off. It’s my first weekend off in years. Dark Matter Zine will resume its regular programming soon.

Yesterday at lunchtime I walked into Canberra’s Civic Centre to meet my partner for lunch. I arrived first, put my things at a table and queued to be served while playing Pokemon Go on my phone because the wait was a few minutes. When the man in front of me was finished being served, I stepped forward to be served but another man jumped the queue ahead of me. I gaped and said something.

‘Don’t mind me, I’m used to being invisible,’ I replied.

‘Okay,’ he said and turned to be served.

After admiring his back and the woman serving him who, by serving him, participated in this ableist behavior, I collected my things and walked out. If I can’t be served as an equal — when I’ve waited my turn — then I’m not going to stick around. I’d eaten there most Tuesday lunchtimes for several months but, if I can’t be served when it’s my turn, I’m not going to wait indefinitely. And I’m really not going to wait until my partner arrives so they serve him because that would piss me off even more.

Privileged authors don’t have this experience; they don’t understand the invisibility of people with disabilities.

If it was just one incident every day, I could make a joke of it. ‘The Dick of the Day’. I could blog about it regularly, aiming for comedy Bloggess-style. Lampooning ableist dicks who make life harder could become a hobby.

But that was the third incident in less than an hour and a half. Exhaustion had already set in.

At 11 am I arrived at a high-needs aged-care facility where I read to elderly people, only to find a large group of people singing in the foyer. My reading had been cancelled. Again. And they hadn’t told me. Again. My time as a disabled person is not important.

The woman who is my boss arrived and told me she could have phoned me, she knew I was walking there, but she decided not to. Instead she took me to HR. Oh fucking joy.

I have a government-issued ‘working with vulnerable people’ card, issued after extensive police checks. However, this facility is not satisfied that the government has approved me, they demand that I apply for new police checks because the police checks have to be renewed every three years and mine were one or two months old when I started volunteering there. ‘Our police checks are better’. I kid you not.

I attempted to fill in an online form about 6 months ago but that, apparently, failed. It was also much more difficult than filling in the government-issued form requesting the working with vulnerable people card, a form I filled in on paper and submitted to Access Canberra without a hitch back in February.

The facility’s online form failed and was returned with instructions to fill out a new form.

The new form they gave me back in June or July was partly filled in already. It gave a staff member’s email address where it should have given my email address. It included some inaccurate information and missed some information. The form stated that this was a first application. I wrote on this paper form that I already had a current card and gave the card number.

After the form sat in HR for 2 or 3 months, yesterday they ambushed me with a public interrogation about who I was and personal details of my life. The woman asked for a drivers license THREE TIMES while I was standing there with my mobility cane.

I pointed out that my passport is worth 70 points and my working with vulnerable people card is worth 40 points so I don’t have to give her any more confirmation of ID. She refused to accept the working with vulnerable people card although it is government-issued ID. She insisted I give her a drivers license, credit or debit card, Medicare card… she wanted utilities bills, proof of every name I’d ever had (I’ve been married twice and reverted to my maiden name between) and more. This appointment yesterday for a simple police check was worse than when my partner applied for government security clearance.

The fine print (that I’d read at home using a desktop magnifier) specifically states that I have to include every name I’d ever had and that it’s an offense not to fill in the form completely and correctly.

The Woman From HR (the name of my next horror novel) said, ‘Let’s just put “Haynes” in because that’s the name in your ID.’

‘You can’t do that,’ I had to explain two or three times. ‘The fine print on the form… blah blah my husband has security clearance and works for the government blah blah the form must be filled in correctly OR IT COULD AFFECT HIS CAREER.’

In the end she told me she’d filled in the form with all the information on the paper form I’d handed in — I don’t believe her — then she printed it out and demanded that I sign the form without reading it.

I wrote ‘Signed sight unseen — I cannot read this form’ over my signature.

She did not include her details or any indicator that she has filled in this form and is responsible for the contents (or lack thereof).

They issued me with a white volunteer’s tee shirt — yay [snark] — and I left.

I was upset and angry about being ambushed, the invasive public interview in front of about 5 staff and their excessive demands for more ID to provided on the spot.

On the way to the cafe for lunch where I habitually meet my partner to recover from what can be stressful sessions at the aged-care facility, I minded my own business, caught a few pokemon and tried to get into a better headspace in the 3-kilometer walk. 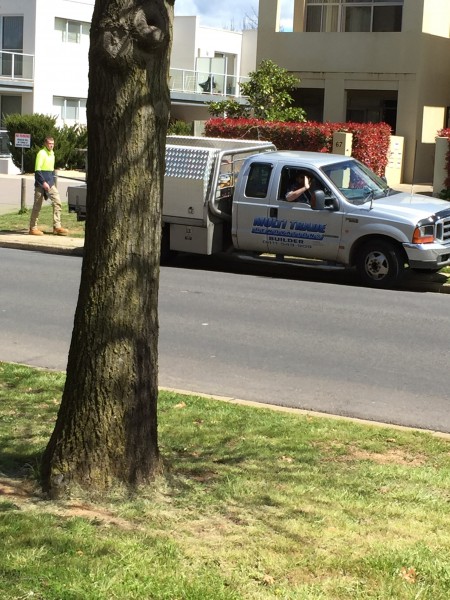 Some asshat in a van tooted his horn, waved and yelled. If I heard correctly he yelled ‘Ride ’em cowboy!’ Really? I used to wear an akubra because it’s a very practical hat, providing better sun protection than my current cap, which exposes my ears and neck. However, I stopped wearing my akubra years ago because total strangers yelled harassment and abuse through their car windows while driving past. Yesterday I was wearing a cap, a zip-up woolen cardigan, jeans, trainers and was using a blue mobility cane. Perhaps I was walking too fast for his taste so he felt the need to harass a lone disabled woman? I don’t know. I took a photo of him to share, hoping that online evidence would help dissuade him from continuing this practice. (Last week I shared two photos of vans blocking access to the footpath on Lonsdale Street; this week the footpath was clear of parked vehicles. Win.)

By the time I was in the cafe being passed over in the queue, it was the third ‘event’ in less than an hour and a half. Ableist people feel entitled to pile on, saying ‘She overreacted’ or ‘I’m only doing what they did’. ‘Oh but you only had to wait for ME’ or how about this gem: ‘It’s ok [that I’m blocking the footpath with my van], I’m waiting for someone.’

And don’t get me started on general access to footpaths around Canberra; the people who designed the mazes — like the mall on Alinga Street — and those who block the paths with their furniture and sandwich boards don’t navigate the mazes they create let alone try to walk through while vision-impaired or in a wheelchair. Just walking through Civic Centre is stressful, with nothing going wrong and no cars running over my cane or accelerating towards me while crossing the zebra crossings and at the lights.

Privileged authors who don’t do their research and don’t consult with people with disabilities will never portray the lived experience that the vulnerable endure day after grinding soul-destroying day. When privileged authors use their imaginations to represent disabilities and any other vulnerable minority group, they cannot come close to our reality. To try to do so is spurious, superficial; it’s a grab for undeserved attention, unworthy of critical acclaim. Let us judge because it’s our story they’ve misappropriated to further their careers.

2 more dicks 208 metres apart and a casualty of war. 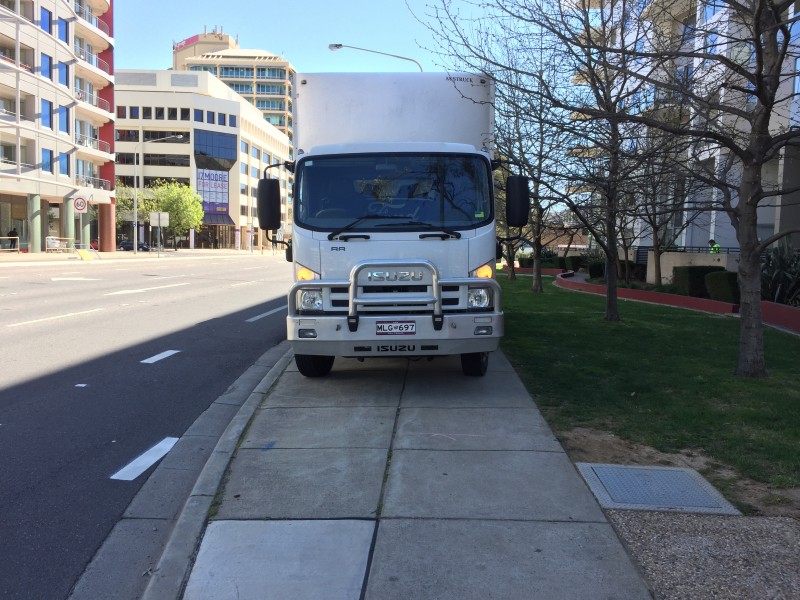 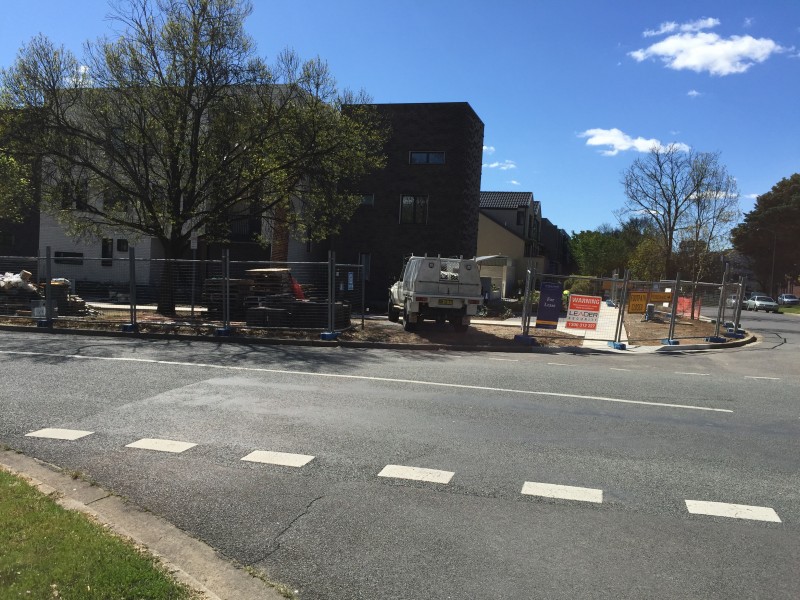 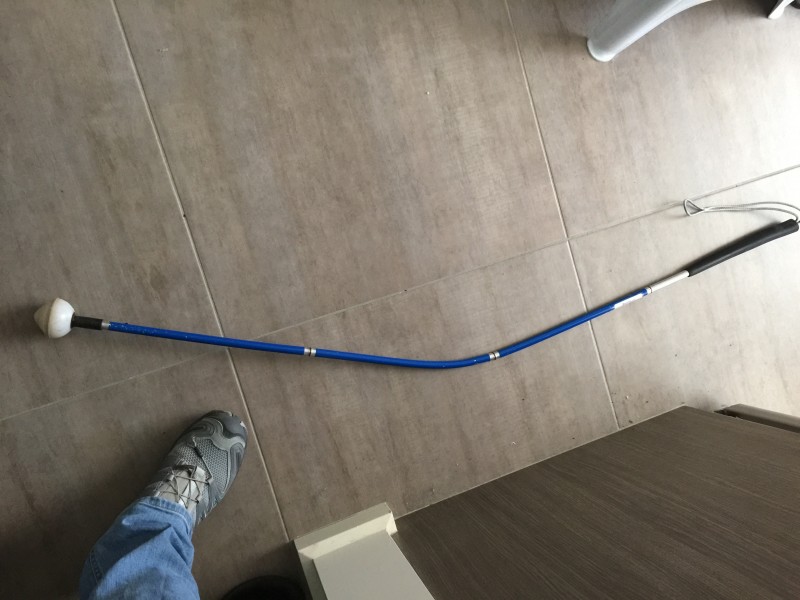 A light-weight aluminium cane with a hollow core to fit a thick elastic rope is not designed to be captured by a pothole while I was forced to walk beside the fencing that blocked the footpath.