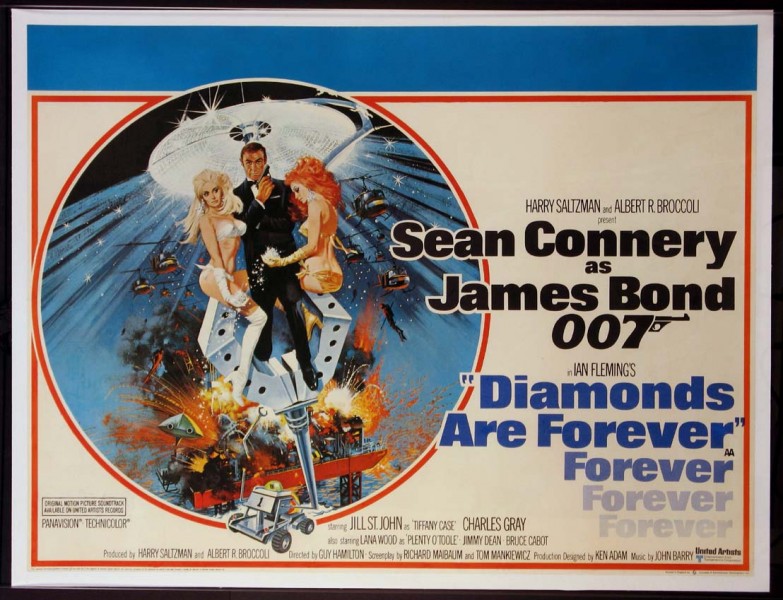 How can you follow up (one of) the best James Bond films of all time? Obviously by releasing this hunk of garbage and recasting the lead with an out of shape and out of touch Sean Connery as James Bond 007.

Now stick with me here, as you get a chance to read my truthful thoughts on Diamonds Are Forever, the final Sean Connery James Bond film and the beginning of the 1970s era of the franchise. Don’t think my love of the Bond films excuses the bad choices the producers make: I am just as critical here as any other form of media I consume.

All events from On Her Majesty’s Secret Service have been removed from the plot. James Bond is searching for Blofeld after the events of You Only Live Twice, and the master villain has made the choice of creating body doubles that he can hide behind. When 007 finally catches up with Blofeld and kills him, the plot moves onto a diamond smuggling story. Using the identity of Peter Franks, 007 follows the diamond smuggling ring in the hopes of figuring out why all people who have touched the diamonds are dying.

The diamonds lead Bond to America. Things begin to get interesting when the Howard Hughes–inspired character, Willard Whyte, uses his company to launch a diamond powered satellite laser into orbit. The man behind Willard Whyte is revealed, and soon he is holding the world at ransom. Now it’s up to James Bond to foil the evil plot.

Okay straight off the bat, I am not a fan of this film. Seven reviews in and finally you can stop worrying about everything being all sunshine and rainbows when it comes to the franchise and my reviews. After George Lazenby turned down the opportunity to reprise the role of James Bond following the negative press and his inflated personality during On Her Majesty’s Secret Service, 007 producers were a little worried. OHMSS hadn’t perormed as well as originally expected and people were clamouring for something familiar.

After screen=testing a few notable names, including TV’s Adam West, producers decided to hand over $3 million to Sean Connery. Part of the one-time deal to return to the role that made him famous was that United Artists would agree to finance two films of his choice. A deal any actor would take and one that Connery was proud of, considering all $3 million went directly to starting up the Scottish International Education Trust. So while most point out Connery returned only for the money, he never received a cent for the part. For that, Sean Connery gets a tonne of respect.

I’ll save my thoughts on Connery for just a little later on, but right now lets get stuck into the plot and be warned, SPOILERS ahead. I’m a big fan of the basic story here. The laser in space is something that has appeared in many films many times throughout the ages and, here in Diamonds Are Forever, Blofeld does his best to hold the world to ransom. Cat out of the bag, Blofeld didn’t die at the beginning of the film, it was actually his body double that 007 killed.

Being the smart man, Blofeld is fully aware that James Bond is hot on his tail and uses his brains to organise body doubles to throw off any potential threats against him. It’s also thanks to his big brain that Blofeld manages to impersonate Willard Whyte, a powerful businessman and recluse, using his wealth to use the diamonds as a laser in space. It all sounds very Austin Powers–like but I don’t care. Congratulations to the writers in coming up with a good plot and glad to see it has been lampooned many times many years afterwards. Now, what is the fate of Blofeld at the end of this film? Oh that’s right, we won’t be finding out until years later in For Your Eyes Only.

During my review of You Only Live Twice, I mentioned how Connery looked a little tired in some scenes but, overall, he never phoned in his performance and looked to be having fun during the film. I also didn’t mind his minor weight gain explaining it suited 007. Unfortunately, the same can’t be said here. Mr Connery is very much phoning in this role. For major parts of the film he seems bored with the script. Yeah he delivers the lines with pure Connery class but, watching the man, he doesn’t look like he cares. The worst part is that being Connery’s final James Bond film, it is often looked as his final mark on the franchise. A sad, terrible mark if you ask me.

Unfortunately Telly Savalas doesn’t return as Blofeld in Diamonds Are Forever. The obvious reason is because producers wanted to create distance between OHMSS, but you can feel the drop in quality villain here. Blofeld, as played by Charles Gray, just doesn’t do it for me. It goes back to the frail approach from You Only Live Twice, although he has a little more size. Charles Gray does a serviceable job here, however I just don’t buy him as Blofeld. I was spoiled by the previous 007 outing.

We get two Bond ladies here. Lana Wood as Plenty O’Toole is in this film for maybe 5 minutes of screen time. Her presence is pointless so I do not see much reason to spend any more time on her than needed. She’s gorgeous to look at but has zero substance. Next up is Jill St John as Tiffany Case, the main smuggler of the film, but where did it all go so wrong? Starting off as a strong independent woman, she’s smart and clearly takes care of herself. Yet by film’s end Tiffany possesses none of those traits. I don’t get how it can change so drastically. Don’t get me wrong, I do enjoy watching her on screen, but thats about it. I’ll admit she provides Bond with some classic one liners.

Let me save this downer of a review by talking about the saving grace. Mr Wint and Mr Kidd who take the place of film henchmen. They are an absolute delight to watch on screen. They are assassins and are tasked with killing each person who has come into contact with the diamonds. Yes, they have cheesy lines and a tendency to over pronounce words to really play on a pun but I don’t care. These guys have the best chemistry and share some of the most amusing scenes together. A pure delight to watch and worth the runtime alone.

A fun fact about Wint and Kidd: Bruce Glover (Wint) is the father of Crispin Glover, famous for playing George McFly, and Putter Smith (Kidd) is actually a recording artist and, until this film he hadn’t acted in such a large capacity.

My final thoughts on Diamonds Are Forever. This has been the hardest review I have ever written. Not only has it taken me an entire week to write this but I have gone through two major revisions and a complete rewrite in that week. Why am I telling you all this? Because this is a happy place. A place where I can speak truthfully and explain just how much I dislike this film. It’s undeniably a fun film with some good characters (Wint and Kidd). The music is always a pleasure thanks to John Barry and I praise the plot for having a giant laser in space but thats it. I’m not a fan of Connery here because he just bores me. Everyone here bores me and it’s just a damn shame.

After On Her Majesty’s Secret Service, the producers wanted to try and recapture some of the charm and fun from Goldfinger but, with a tired Connery in the lead, no way was that going to happen. Watching Sean Connery here puts a bad taste on his entire era as Bond.

It pains me to say this but skip this film and just imagine Bond managed to seek revenge on Blofeld between OHMSS and Live And Let Die.

James Bond will return in Live And Let Die.