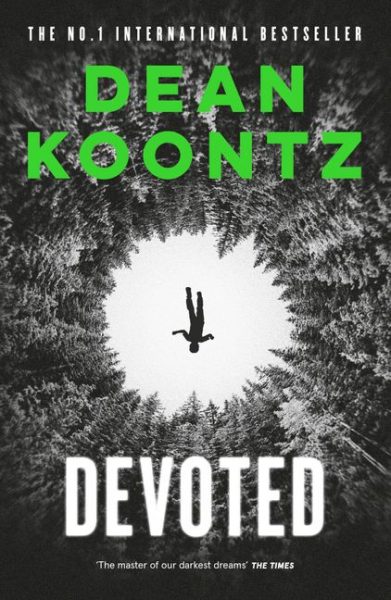 Devoted is a twisted, crazy roller coaster of a book. Written by bestselling American author Dean Koontz, this story (due for release on April 6th 2020) is at times genuinely frightening and disturbing, and at others feels like a PG family movie. It’s one of the few books I have finished wondering what the heck I’d just read.

The plot centers on a few different characters: a non-verbal autistic boy and his mother, Megan, trying to move on after the sudden death of his father. The CEO of a radical experimentation lab, Lee, is on the run after a catastrophic malfunction. And a golden retriever of extraordinary intelligence plays his part in creating a new world.

The boy, Woody, has theories about his father’s death, and accidentally calls attention to himself while deep diving in the dark web looking for answers. The repercussions he triggers aren’t the worst threat on their way. Lee is also an old flame of Megan’s and has escaped a lab where 93 others died. Aware that authorities will blame him, he plans to start a new life. Determined to take Megan with him, Lee races to get to her, no matter if she wants to join him or not.

The first half of Devoted plays much like a thriller. A beautiful and devoted mother, caring for her disabled but highly intelligent son, neither with any idea of the terrifying threat that’s closing in on them. Add in Lee, who is arrogant, bitter, entitled, and determined to take what he wants. Unknown at first to him, he has been exposed to microorganisms designed to create super-humans in the lab. The result is the enhancement of his physical self while his mind becomes increasingly primitive.

By the time he reaches Megan and Woody, he is a disturbing psychopath. As chapters unfold from his perspective, we witness firsthand his decline into madness. It is genuinely unsettling, particularly as it often centers on misogynistic views which feel all too familiar. This is masterfully complemented by law enforcement processing the aftermath of his actions, providing a reality based perspective on just how messed up it is.

Not What I Was Expecting

Throughout this tense and confronting narrative runs a sub-plot that feels at odds with the rest of the story. Kipp, a dog with human level intelligence, has just lost his beloved owner to cancer. He is, by nature, the epitome of good. He connects to a network of similarly intelligent dogs through a telekinetic communication system called The Wire. This is where the PG family movie bit comes in. It feels much like switching channels between The Shining and Lassie although, to be honest, the dog bits kept me reading when the psychotic misogynist got to be too much. Kipp, of course, ends up playing a crucial role. When the story involves two very dissimilar sci-fi concepts the result is a truly bizarre experience.

I can’t write a review of Devoted without speaking about Woody and the portrayal of his autism. Woody is an eleven year old boy with genius level intellect who has never spoken a word in his life. He is one of the central characters, meaning we hear parts of the story from his perspective. So his non-verbal status doesn’t stop us from hearing his thoughts.

Early on in the story Koonz establishes that Woody does have the ability to speak. He simply feels he cannot due to overwhelming shame and the fear of embarrassment risked by revealing himself through speaking. In addition to this, later in the story Kipp and Woody speak to each other in depth using The Wire. This basically cures Woody of his autism. He realizes his shame is unfounded and starts to speak totally normally, act normally, and even at one point ‘plays autistic’ to trick the bad guys.

I have some big issues with this depiction of autism. Aside from the fact that I thought the silent genius trope was something we had moved on from already, I have an even bigger problem with his non-verbal autism rationalized as Woody’s choice based on feelings of shame. Autism and autistic behaviors are not a choice, and an enlightening experience will not magically turn them off. Much less that children begin to speak generally at around a year or two old, but don’t have the mental capacity to conceptualize shame until much older. It makes for a lovely happy ending, but it’s a total misconception of autism and feels like a slap in the face for anyone who is actually affected by it. It’s 2020, we need to do better.

Devoted took me totally by surprise. I didn’t have many expectations but this was something totally other. Parts of the book were genuinely gripping and others heart-warming, but the leaping between the two felt jarring at times. While the writing was good, the biggest let down of the book was the oversimplified depiction of Woody’s autism, which ended up leaving a bad taste in my mouth, even more so than the bizarre mishmash of genres.