Daniel Haynes, Starcraft pro-gamer, was Ript when he embarked on an epic meal at Hogsbreath Cafe for his 20th birthday, accompanied  by girlfriend Naomi Throup (aka Nom) and Dark Matter minions Edward and Nalini Haynes. 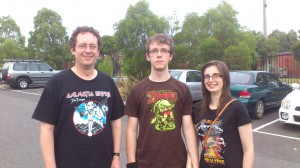 Daniel wore a Legend of Zombie Ript tee and Nom wore I survived the Mayan Apocalypse Ript tee that arrived last week. Edward wore The Trooper, an old fave.  Yes, we are a family of geeks, and we’re proud of it!

I was the one behind the camera, as is usual for family photos.  In hindsight, I should have taken the photo with them on the veranda or at least with our new car in the background.  Ah well, we were running late.