Trouble on the home-front. Items received this week include fan-mail for Daniel Haynes, but none for Smokey!  Smokey is torn between being on strike and being an attention-whore to shill for fan-mail… 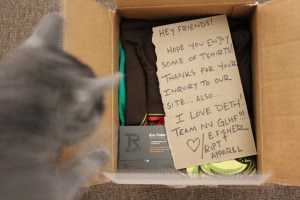 Smokey discovers fan-mail – and it’s not for her!

I am devastated, DEVASTATED I SAY. Why is it that deth, my former servant, receives fan mail and NOT I?

Unlike some poodles, I don’t do pole dances; this is my sexiest pose. 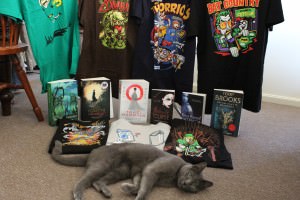 Smokey performing for her fans
with items received this week

Ript sent tee shirts.  Just one or two.  They obviously forgot CATS DON’T WEAR TEE-SHIRTS.  Nor do we understand this human obsession with clothes.  My servant searched the Ript site to link Ript pics of their tees – the wailing!  The drooling! The WANTING!  It was hilarious! 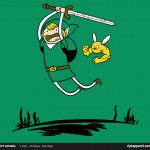 A Hero from Ript 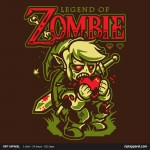 Legend of Zombie from Ript

It was even funnier when, after spending ages drooling and searching, she only found pics of two of the tees, so she had to take another photo herself. 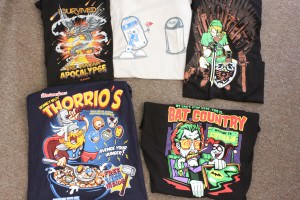 [deth isn’t answering the phone – he’s probably in the middle of a tournament as Smokey writes this.  Do you think he’d notice if I ‘forgot’ to give him any tees? – Editor]

The Disestablishment of Paradise by Phillip Mann is billed as “An ecological SF thriller from one of the greats of the genre, with elements of Avatar and Silent Running.”

This book is going to cause a stir in this house.  When deth and his sister were each about 2 years old they learnt to say ‘antidisestablishmentarianism.’  Any novel with a title like this will grab deth’s attention, not to mention the added attractions of the novel being SF from a ‘great’ in the field. I anticipate a cat fight over who is going to read, review AND KEEP this book: entertainment value! heh heh

It’s all good, though, because whenever deth wants something, he comes to visit and cuddles me and brushes me, currying favour with the alpha kitty of the family.

Wild Girl by Kate Forsyth is a novel about the history of Grimms’ fairytales from an Australian author renown for her retelling of fairytales.  Although why the human fascination with Bitter Greens – ugh, I don’t like greens, let alone bitter ones!  GIVE ME MEAT!!!

Kate talked to my servant about Wild Girl and Bitter Greens a while ago; I graciously permitted this interaction with limited supervision. I didn’t even photobomb that particular interview.  I’ve been less tolerant lately – I joined the Space Marines interview, but my contribution was EDITED OUT.  <glare>

Dreaming of Zhou Gong by Traci Harding is the first instalment of an epic fantasy set in ancient China.  The cover is almost hypnotic for kitties with red set on white; it’s also peculiarly attractive to my servant with its unique style, excellent use of contrast in colour and texture (portions of the cover are embossed and glossy, contrasting with the matt greys).  This cover could be short-listed for a design award…

Neferet’s Curse by P.C. and Kristin Cast is the third novella (that’s human-speak for a small book) in the the House of Night series.  Personally I enjoy houses at night, especially when the humans go to sleep, leaving me to my peaceful vigil, guarding my territory by gazing through the windows.  I’m not so sure about this priestess business, but I’m happy for Neferet to worship moi; with the allusions to Egyptian history, Neferet must have a relationship with cats.

Frost Burned by Patricia Briggs looks a little blue to my taste and is even more doggy!  I’m not a fan of werewolves myself even though Mercy Thompson, the protagonist, is a kick-ass female mechanic.  Personally I prefer vampires: I’m convinced they are disadvantaged humans with feline aspirations.

This book sounds ok.  Wolf crawls to vampire on her belly, showing submission.  Vampire is subordinate to cat.  I can live with that.

The Bloodfire Quest is book two of the Dark Legacy of Shannara by Terry Brooks.  This is a sequeal – hem – sequel to the other Shannara books; this time the druids’ search for the Elfstones leads them into the Forbidding.  The Forbidding is another dimension where things much more deadly than cats roam, seeking entry into the world of Shannara, a futuristic Earth where Elves and magic exist alongside humans and… others.  <shivers>

My consolation is that Terry Brooks writes fantasy not horror, so although it may be terrifying for an adorable little kitty like me, the Bloodfire Quest is for lovers of epic fantasy.

I’M DONE, FINISHED, THIS COLUMN IS WRITTEN.  Now I can slink off and have a nap before the strenuous exercise of the evening begins: convincing my humans I am so poor and deprived that they should feed me the best of their … sausages.  SAUSAGES?  You mean, no fresh chicken tonight?  BAH!  I don’t know if I can be bothered…

<Smokey walks away, nose down, tail drooping, searching for a quiet soft spot to sleep the day away.>