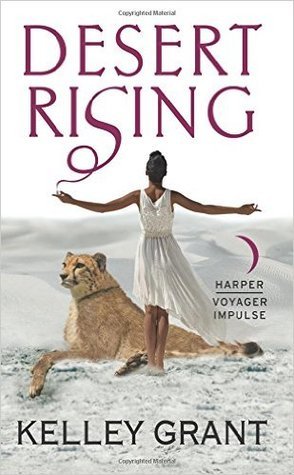 Sulis, a woman from a nomadic desert tribe (desert rising?), feels called to the temple to serve the One, the god of her people. To enter the temple she pairs with a feli, a waist-high cat who channels communication between her and her god.

The temple is divided: the One (all-powerful god) made four lesser gods who bicker amongst themselves while ruling over humanity. The feli are particularly important for the Voices, the “popes” of each lesser god, to channel their deity. Channeling is a costly event and yet they serve; the benefit of service is power.

Sulis’s twin brother, Kadar, falls in love with a Forsaken, the lowest caste of society; this particular Forsaken woman heads a faction of an underground freedom movement. The movement is planning an underground — or across desert — “railroad” to help Forsaken people flee the city before war breaks out.

Desert Rising is a Pern-type story (the Pern series by Ann McCaffrey) with factions, politics and creature-bonded privileged individuals. I confess to enjoying these types of stories and, as I am personally under a cat’s paw, I love the feline companions.

However, segments of the story fall into “telling” or exposition mode. Instead of building tension towards the climax by showing us the buildup of tension within the temple, gangs within factions bullying and even assaulting people in different factions, Grant tells us about it. These segments were potholes in the plot-road to the climax.

Early on, Grant drops hints of a potential romance between Sulis and a chance-met stranger on the road to the temple. Later, Kadar is attracted to the Forsaken woman. I wanted more of this romance and of the story-threads outside the temple, however, this is a subplot.

Desert Rising is the first novel in an ongoing story, however, there is a satisfactory lull in the story to tide the reader over until the next installment. Overall, Desert Rising is an enjoyable read, especially recommended to fans of fantasy, creature-bond relationships, strife in religious systems and international politics.