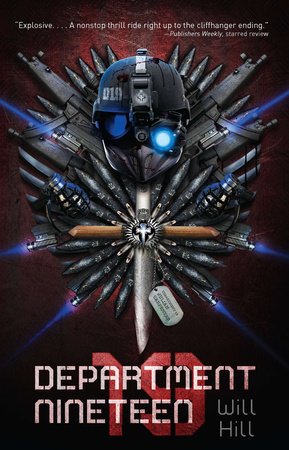 A review by Jade Hounsell

Before learning about Department 19, Jamie Carpenter is just your average 15 year old. Until a group of men in black murder his father while he watches. Jamie has no idea who these men are and why they killed his father. Nobody is forthcoming with answers.

Two years on and Jamie is still struggling to come to terms with his loss, and dealing with being bullied at school, having no friends and constantly fighting with his mother. Then Jamie is attacked by what he thinks is a beautiful vampire girl – but that can’t be right, can it? And if all of that is not bad enough, Jamie walks in as his mother is being kidnapped by this weird guy, who turns out to be the world’s second most powerful vampire. Jamie would have become a victim himself if not for a mysterious 8 foot tall stranger, who turns out to be Frankenstein (yes I am serious!).

Frankenstein takes Jamie into the heart of a secret government agency called Department 19, whose job it is to protect the world from supernatural creatures. Once there, Dept 19 explains that Jamie’s ancestors, including his father, all worked for Department 19 for the last 100 years. Jamie has to decide if he wants to continue the tradition and join the fight or walk away. As you may have guessed Jamie decides to join the fight, mainly because he wants to find and rescue his mother: that is, if she is still alive.

There is not a whole heap more that I can say about the plot without giving too much away but what I can say is that the book revolves around the question of what if the story of Dracula was real and not fictional? (Not to mention Frankenstein.)

As you would have guessed by now the main character in this book is Jamie. He is still young. Then he enters this nightmare where everything he thought was fictional turns out to be real. He reacts how I believe most people would react, making him a very relatable character. I feel that the rest of the characters are not as well explained or relatable. However, this is the first book in the series so there is room for Will Hill to build on them as he goes along.

The vampires in this book are also not the brooding, loveable sparkly kind (all I can say is thank-you). They are the more classic I want to rip your throat out and drink your blood kind. They strike with no remorse and kill in various horrific manners and the fight scenes in the book are quite specific and graphic.

I really liked Department 19: it is quite action packed and suspenseful. The only thing I have against it is that the book ends with quite a few questions still not answered. Since it is the first in the series I am not at all surprised. Even saying that, this novel answers quite a few questions. This is the sort of book that you say you will only read a couple of pages but you really just cannot help but keep going and next thing you know it is 2am. Aimed at the teenage boy market, I think that this book does have something to offer to all ages.

Read this if you enjoyed the horror stories in Zombies vs Unicorns.