Bram Stoker’s Scholomance provides a deadly education in the magical world existing alongside the ordinary non-magical world in this tale of demons, magic users and murderers. Galadriel Higgins (aka El) is ready to murder Orion because he saved her life. Again. She’s furious.

(Novik reads the opening scene in this podcast interview – I love it!)

Snarky outcast surviving on the edges of the herd in the midst of a system intentionally set up to protect the precious children in the bright shining center. What is not to love?!

Horrors are a combination of The Chilling Adventures of Sabrina and a whole season of Angel or Buffy combined.

It feels inevitable that El builds relationships throughout the story but, as an inveterate porcupine, the means is hilarious. As are the means by which El builds mana: doing jumping jacks, crocheting items and running around.

There are no disabled people in this story. None. Anyone who isn’t quick and strong is dead. But this also goes for nondisabled students who die through this story and through the past few centuries of the Scholomance’s operations. I would have liked at least one disabled person who was magically strong enough to survive and find ways of coping with this hostile environment.

However, El is a woman of color with a very blonde mother. Without her father on the scene, people assume she’s an unwelcome fan or groupie. Even her own family – her father’s family – has rejected her. Even tried to kill her. I’m guessing that the prophecy that prompted that has been misunderstood. Although that’s an established trope, I LOVE THIS TROPE. Because it’s SO much better than the “Chosen One” trope, injects humor, and strips away potential Mary Sue (John Jack?) elements.

What do you call a “Mary Sue” when it’s a male author? Because there are SO MANY male authors who write “and all the women fall in love with this nerdy reject-type male protagonist” and I’m like “WHY?! HE’S SO UTTERLY REPULSIVE, WHY?????”

Novik established a class-based system that uses and discards those of lower ranks. This is brutal and stupid, especially when the most talented may belong to the lower ranks. However, this is a reflection of contemporary society so I’m giving her a standing ovation.

This review was difficult to write because I love the story so much. I’ve struggled to articulate why, why do I love A Deadly Education more than other similar stories? I think it’s Novik’s characters but particularly El, who sees herself as unlikable. Others see her and dislike her. One character describes her as “feeling like it’s about to rain”.

(Novik doesn’t love rain? I love rain! But perhaps she meant like a thunderstorm: there’s anticipation, a bit of stress from the electricity and ions in the atmosphere, plus the impending rain.) 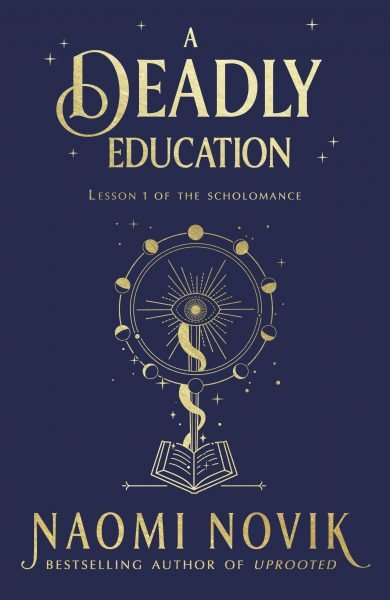