Fetch Phillips is a detective living in Sunder City. Fetch Phillips is, ironically, a human living in a post-apocalyptic world where he is personally responsible for humanity destroying the magic. Now he’s trying to make amends by being a Man For Hire. Problem is, the jobs he’s hired for are the kind that require only dispensable people. Also, he’s not the sharpest tool in the shed. And may have a death wish.

Only someone with a death wish does the things he does.

There’s a murder most foul in a manner that must have been magical. The police call Fetch in to confirm. He starts investigating, only to lose an eyebrow to a fireball. The game is afoot.

It seems like a good portion of the books I’ve been reading lately evoke Ankh-Mopork and Dead Man In A Ditch is no exception. Fetch Phillips is part early Vimes, part Columbo, and part Harry Dresden minus the magic. Because magic is dead.

Sunder City and the world outside include a lot of different people. Colors of humans is irrelevant when you’ve got werecats, succubae, mages and elves scattered through the American Melting Pot.

(See a Last Week Tonight episode for an old cartoon celebrating multicultural immigration into the USA with John Oliver’s acerbic commentary. I’d link it but I can’t find it again, and a lot of stuff gets geo-blocked a few hours after it’s posted.)

A lot of the magical races died when magic died. Those who survived consider themselves less than they were. Some have acquired disabilities.

It’s rare to find a novel with such sweeping representation of multiculturalism and disability, especially where disability is less about imposed barriers and more about lived experience of difference.

There are also people of various genders and sexualities, with no real commentary other than “Please, succubae, I’d like to be left alone”.

All this diversity is not embedded in an unrealistic utopian society.

But the real threat is – drum roll please – NEOLIBERALISM. SHAZAM!!!

And the womenz bloody rock. Gotta say, in my reading experience, it’s rare for a man to write such diverse, well-rounded and insightful women, especially when the lead character is male.

The cover art evokes Ben Aaronovitch’s Rivers of London series but hopefully this series continues to be kind to women. Rivers of London was spoilt for me when Lesley, the real hero of the story, turned evil because of her facial disfigurement. In contrast, Arnold surprised me with his perspicacious commentary about women waiting for the boys to grow up – or getting into the play pen with them (p. 229).

I enjoyed Dead Man In A Ditch as a gritty noir detective story, a post-apocalyptic fiction where the apocalypse is NOT the one we’re living through, and as a reincarnation of Ankh-Morpork. Because Fetch Phillips is TOTALLY Early Vimes. And the women are kick-ass and a huge range of disabilities are practically normalized.

It’s the second book in a series. I haven’t read the first but I didn’t feel that I missed anything. However, I am a completionist and can see myself reading the first when I need a “doona day”. Which could be really soon with the way Canberra has scheduled winter weather in late spring.

I highly recommend Dead Man In A Ditch. 4 out of 5 stars. 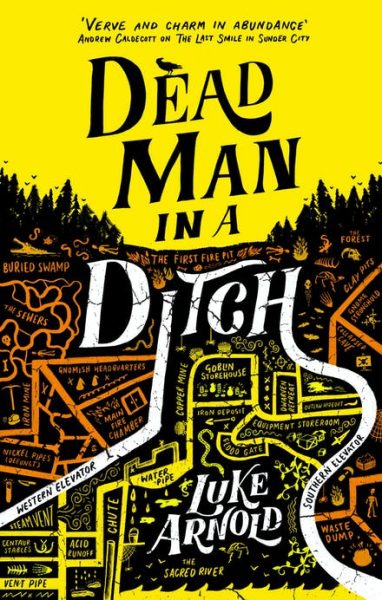