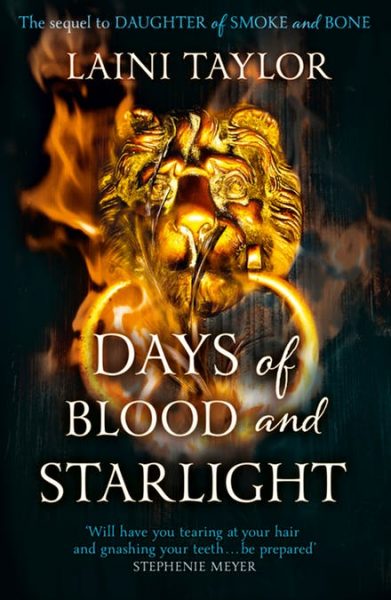 Days of Blood and Starlight is the second in this trilogy by Laini Taylor.  The first, Daughter of Smoke and Bone, caught me hook, line and sinker. The first chapter opens with a vampire roaming the streets of Prague. A human in costume employed to scare tourists.  Daughter felt like a love poem to Prague, instilling in me the desire to explore that ancient living city.  My review of Daughter is here.

In book two, Karou, the female protagonist, describes the events occuring in Daughter and her subsequent misery to her friend Zuzana:

“You know how, at the end of Romeo and Juliet, Juliet wakes up in the crypt and Romeo’s already dead?  He thought she was dead so he killed himself right next to her? …

Well, imagine if she woke up and he was still alive, but…” She swallowed, waiting out a tremor in her voice.  “But he had killed her whole family.  And burned her city.  And killed and enslaved her people.”

Karou and her Romeo, Akiva, return to their world separately, through portals on Earth.  Each tries to come to terms with their relationship and the deep gulf between them caused by Akiva’s vengeance after Madrigal’s death.

Generational genocide, the setting for Romeo and Juliet

Days of Blood and Starlight is a novelization of the impact of generational warfare and the consequences of attempted genocide, the seemingly insurmountable difficulties faced by individuals on both sides who, tired of war, want to lay down arms but struggle to find a new path.  Told as a personal story with strong elements of romance, Days conveys the reality of generational warfare without preaching while truly engaging the reader.  Acts of true heroism that are so minor they don’t change the landscape yet their ripple effects have potential to increase rather than diminish.  Power- and vengeance-hungry individuals on both sides seek to perpetuate the conflict regardless of the cost while individuals with little apparent power seek another way, unsure of how to achieve their goals.

Magic has a cost in Taylor’s worlds, described as a ‘tithe’ of pain, so poetic and yet so concrete.  The difficulty with this is the meaning: a tithe is a tenth – a tenth of what?  A tithe is also a kind of tax, a poetic idea but tax is taken from a portion of a whole.  Sometimes the degree of pain needed seemed disproportionately low compared to the cost of creation while proportionately high for something less creative like casting a glamour of concealment.

Taylor hasn’t quite enforced consistency within her magic system. Sometimes the pain of an injury can be used as the source of magic to heal that same injury but not consistently.  Chimaera were killed to have their souls installed in new bodies, but the pain of their deaths was not harvested for creating new bodies. A waste.

By the end of Days a couple of feats of magic seemed rather easy for the price paid, but it was effective as a plot twist.  I expect this feature of the climax will open up potential for both conflict and victory in the final instalment of this story.

Sex roles are an issue in Taylor’s story.  Karou, formerly Madrigal, was and is pursued by Thiago, the leader of the chimaera.  Thiago’s motivation is less about sex, more about ownership and control, wanting the sexiest ‘car’, refusing to accept no for an answer and retaliating after rejection.  This may sound like a sex role issue but Thiago consistently needs adulation and control; thus this comes across as being more about personality than gender roles.  It is important to note that there is an attempted rape in Days, recounted in some detail.

Zuzana and Mik, Karou’s human friends, have a lovely relationship.  They – kind of – realise they’re too young for marriage but the subject comes up.  Zuzana tells Mik that he must perform three feats to win her hand, just like in a fairy tale.  While intended to deflect marriage proposals about which Zuzana feels ambivalent, this aspect of their relationship takes on a life of its own.  This is endearing, adding some humour to the story, as long as the reader doesn’t get the horrors at the thought of a couple of 18 year olds marrying.  These characters are so much more than just this thread, however: they develop a little themselves in Days while interacting with the chimaera to give these demonic-looking brutal soldiers greater depth.

There are women warriors on both sides of this conflict but they seem to be a minority.  One woman is mentioned who appeared to be a ruler, but it’s usually men who lead.  Women are mentioned as concubines and mothers, whose status as women affects their lives.  While reading I was pleased to engage with some kick-ass female characters, some of whom fought, many of whom performed other roles.  It wasn’t until I started analysing Days after finishing the novel that I noticed some gendered stereotyping, so it didn’t hinder my enjoyment of the novel.  My attitude is that gendered stereotyping exists so fantasy can acknowledge this stereotyping whilst engaging with issues by, for example, characters behaving in non-conformist manner.

I appreciate a tithe of pain as the price of magic although I have a few comments about the overall system.  The main characters are sympathetic while facing seemingly insurmountable conflict that is relevant to the real world.  The plot is engaging and well-paced.  I highly recommend Days of Blood and Starlight.