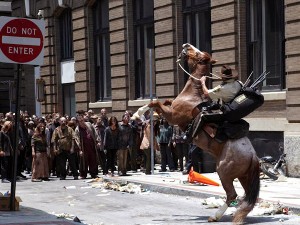 After being gunned down in the line of duty, Deputy Rick Grimes (Lincoln) awakens in a deserted hospital. Grimes stumbles around the empty hallways until reaching a door scrawled with “DON’T OPEN DEAD INSIDE”. Once he has escaped the hospital and its corpse-filled car park, Grimes makes his way home to find his wife Lori (Callies) and son Carl (Riggs) are missing.

While coming to terms with the gravity of his current situation, Grimes encounters Morgan and Duane Jones (James and Turner respectively). Morgan and Duane bring Grimes up to speed with the current situation: people are dying and sometimes they get back up again. Zombies. The Joneses inform Grimes that Atlanta was deemed a safe haven and that he is most likely to find his family there.

Based on this information Grimes gathers supplies and heads alone to Atlanta while radioing intermittently on the emergency broadcast station. Viewers discover that Grimes has been heard by a group of survivors including his wife, son and partner (Bernthal). However, they cannot transmit to Grimes or warn him of the horrors that await in Atlanta.

Grimes runs out of gas so rides a horse into the city of Atlanta only to find himself surrounded by zombies. The episode ends with Grimes ensconced in a military tank from the walkers while a voice speaks to him directly over the tank’s radio.

This is how you make a first episode.

In 67 minutes we get a clear and concise overview of the (I assume) main character, his life, and the events with which the world is currently dealing.

There was no part of this episode where I thought it was silly or unnecessary. Everything added something to the narrative, the character development and the process of showing the viewer who these people are.

The zombies in The Walking Dead are perfect. They look great, they sound fantastic, and they have the slow, shuffling walk of classic zombie lore. I just can’t get behind a zombie lore that expects me to believe that these decaying beings can run faster than an Olympic sprinter.

All in all The Walking Dead has started with a bang in ‘Days Gone Bye’. I look forward to continuing with this series.

“Hey you. Dumbass. Yeah, you in the tank. Cozy in there?”