It’s been a few weeks since I watched The 100 and today the next review is due so yesterday I jumped back in and watched another zode. Before ‘Day Trip’, I was side-tracked by episode 1 of Ascension. OMG The 100 is brilliant in comparison.

The 100‘s direction is better for a start: both series have competent actors yet Ascension‘s characters remind me of high school drama classes where my teacher prescribed Bertolt Brecht plays, rigid stop-start movements and robotic acting. The 100 is far more engaging with more believable characters, performances sucking you in, inviting a suspension of disbelief.

In ‘Day Trip’, Bellamy is running scared: he believes Shumway, the guy who got him to shoot the chancellor, will have him killed once the adults reach Earth. He’s half-right: Shumway gets this other guy — he must be a redshirt because I haven’t seen him before and he looks a LOT older than the juvenile 100 — to try to kill Bellamy. No Chekov’s gun here: there’s been no clue Shumway had more agents in the group.

With Clarke, Bellamy embarks on a search for a hidden bunker conveniently close by although not previously mentioned, which should have supplies to help them survive winter. Bellamy has supplies to run away. Bellamy continuing in his plan to run away seems a bit ‘because plot’ after negotiating for and receiving a pardon from the chancellor in exchange for the identity of the man who wanted the chancellor dead. Anyhoo…

Some of the nuts the 100 have been collecting are hallucinogenic, so cue ‘The Naked Now’ but, surprisingly, with much less sex. It seems like the only people bumping uglies are Finn and Raven, against doctor’s orders but Raven’s putting her mark all over Finn in spite of knowing he’s into Clarke now. Because 10 days of being together on the planet and he’s totes in lurv with Clarke and not in lurv with Raven any more. But he’ll have sex with whoever is offering. Even though Finn’s recovering from a spear to the chest cavity, there aren’t any repercussions from this exercise. Perhaps Finn is a bit… premature. Perhaps Finn is not a redshirt.

Anyhoo, Bellamy and Clarke eat nuts on their day trip. I’ve heard all about Clarke and her same-sex attraction but I’m not seeing any of that yet; instead I see her cut up about Finn and Raven and possibly also attracted to Bellamy. This episode Bellamy isn’t being a dick and he’s not having sexytimes with two girls at once. He also seems to have handed over leadership to Clarke without a fuss, falling into 2IC position. This day trip falls neatly into the Vision Quest trope although neither Bellamy nor Clarke consciously seek spiritual guidance until in psychedelic city.

Meanwhile, back at camp, Olivia takes advantage of Bellamy’s absence and psychotic nuts to get some alone time with the Grounder. When she tries to clean him up, she focuses first on his six pack not his face; INTERESTING CHOICE. 😀

Back up on the space station, the adults deal with Shumway and a new villain steps up. The new villain is a bitch; her identity isn’t surprising unless you haven’t been paying attention. I’d be a bit pissy about Bitchy except she has Clarke and Abigail to balance her out so The 100 isn’t women-bashing. It just doesn’t pass the Bechdel Test because women are only having conversations with men or boys. [eyeroll] I think there were only 4 speaking roles for women in the entire episode and a few female zombies.

I’m enjoying The 100, helped by comparing it with Ascension. Both stories have interesting premises. Both start with a murder or attempted murder. The 100 isn’t original but it is engaging, keeping my interest. Ascension tries to do a Babylon 5 pilot, fails; aims for Babylon 5 ‘below decks’ class conflict, fails; has 3-way sex to engage the Game of Thrones audience and fails at that, too. OMG I love The 100  in contrast. I’m looking forward to Clarke’s development as a character and bracing myself for season 3’s debacle. 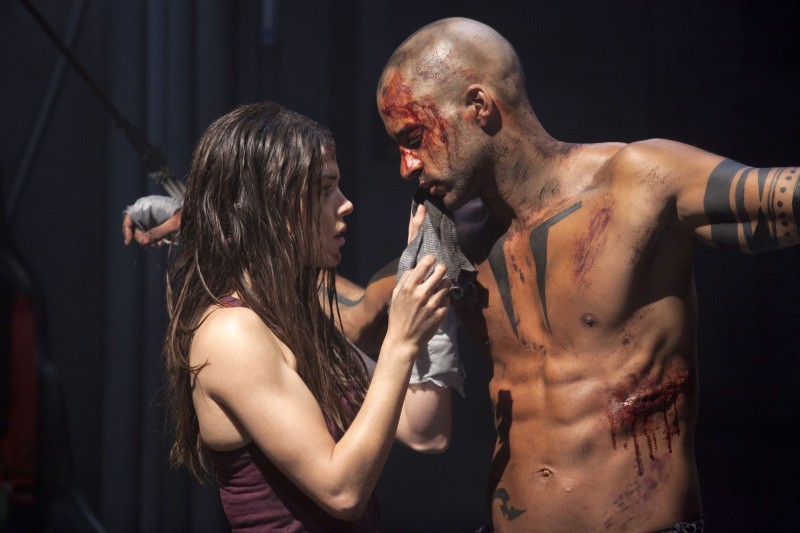