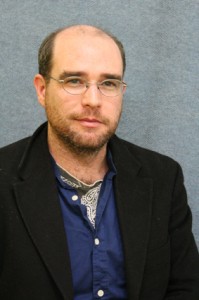 Strange Inspirations is a guest post by David M Henley

Remembering the inspirations that influenced your work years after they sprouted in your brain is like walking down memory lane trying to find that particular tree under which you had your first kiss. The tree has changed and your memory of it wasn’t that clear in the first place … It was somewhere around here wasn’t it?

Whether or not it was the starting point, the Big Bang moment that expanded from nothing to everything, there is definitely one well-known song that acted as a provocation for my future world. You may have heard of it but never considered it a science fiction manifesto before. To deftly step around copyright issues I won’t quote any lines, I will instead paraphrase the relevant lyrics:

Have you got it yet? Here’s not-the-chorus:

So, this song played in my head for years, ever since Scott Bakula sung it to me as a child in an episode of Quantum Leap … That’s not important right now, what is important is that the song lays out a series of social changes that must be undertaken to reach utopia. The challenges are: remove countries and nationalism, decrease materialism and bring people together in the united purpose of creating fairness for all.

Not easy tasks and not easy to imagine a smooth evolution to such a state. The first thing to do is destroy everything we know about now – which I do in the backstory to the Pierre Jnr trilogy with a catastrophic societal collapse followed by a second Dark Age – so we can start society anew. That took care of those countries and their competitive method, but it took many years of researching for me to be able to imagine a society that didn’t measure status with currency and possessions.

This is similar to the Star Trek premise which casually refers to a moneyless society. How do you do it? Can you do it? The odd thing about money, and currencies, is that their value is based on faith. The value of our currencies, now that we aren’t tied to a physical measure such as the gold standard, is determined by confidence. Sure, it is derived from GDP and the amount of cash in circulation, but currency is traded based on what its perceived value is, and the expectations the traders have about what they think it will be worth later: confidence.

While I was taking a furlough in 2008 I stumbled upon the concept of ‘complimentary currencies’. The more I researched complimentary currencies, and the origins of currency, the more it seemed possible to create new value systems out of nothing. What makes them valuable is how people imbue them with worth – and there’s the catch. The people using this hypothetical system have to be behind it all the way.

Luckily, as I was knuckling down to write The Hunt for Pierre Jnr, the chatter around Bitcoin started and the possibility of creating concurrent currencies that rose and fell on different value systems began to emerge. Theoretically you could create a currency based on the block-chain concept, and then link it to anything you wanted: solar power, education, the love of kittens etc. The value of these would be determined the same way it is now: by demand. Sounds crazy, but let me tell you, the people of 2100 have compete confidence in it, and they use hundreds of different block-chain currencies to create value, the sum total of which becomes ‘the Will of society’.

Someday I will write another book in this world that explores more deeply some of these concepts and how they work on the small scale (it even has a title already!) but for those who have asked me where the idea came from and how it developed then I hope this partly satisfies. I got the idea from a song, and it grew from there.

John Lennon’s ‘Imagine’ is on YouTube. [You first heard it on Quantum Leap? Really? I guess I might have too, if it had been showing in backwaters like Tasmania when I was a kid. — Editor]

Connect with David in these places: